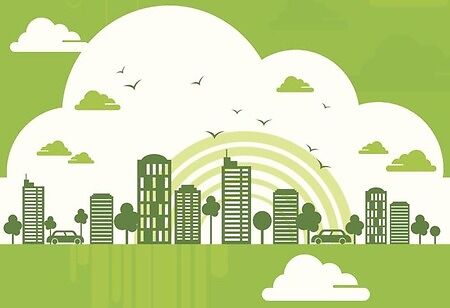 Carbon dioxide (CO2) emissions are project to be at 1.4 percent, posing a threat of approximately 30 million tonnes in India this year, according to a latest report by International Energy Agency (IEA). Although these harmful emissions retreated last year, but are back in action and this time they are higher compared to 2019, stressed IEA.

However, the Amazon Web Services (AWS) reported that those emissions could go down almost 80 percent through cloud migrations, given that cloud solution providers provide 100 percent renewable energy induced services. This could actually mean preventing 4235 metric tonnes of emissions by running the same enterprise as well as public sector workloads on cloud.

In fact, there are already top cloud services toiling every ounce of effort in erase the nation's carbon footprint. Let alone homegrown IT companies most notably Wipro and Infosys pledged towards Net-Zero Emissions on the other hand.

The fight fire with fire strategy falls deep with this one, since tech companies are working towards beating CO2 emissions through technology. There again, technology is one of the key factors for such emissions, yet they are used as cure as well. Thus, cloud migrations are proving to be one of the most reliable technological solutions to these baneful emissions.

Much of its platform being used to survive this detrimental storm, there's more to it than sheer survival. It has helped organisations fetch more benefits and in turn organisations developed more objectives beyond scaling their businesses and maintaining cost-efficiency.

Upon realising the many benefits that rain the the cloud, organisations shifted their businesses at the wake of the pandemic and some even ahead of the pandemic's arrival. Wise men do say that only fools rush in but that's not the case here. Since those organisations are paving way for accelerated digital transformation for other organisations that are probably decisive or preparing to join adopt cloud solutions.

As more companies join the cloud club, carbon emissions will soon become a thing of the past.

Here's How Cloud Washes Away CO2 Emissions
As one would commonly expect, it first starts at shifting the entire business onto the cloud. There forth a report by 451 Research, a unit of S&P Global Market Intelligence, suggested that at least a 25 percent from the 1,200 largest publicly traded companies in India deposit one megawatt of compute workload on the cloud, while keeping check of renewable energy of the same. It could save a year's worth of emissions from 160,000 Indian households.

The journey toward a sustainable cloud then progresses through three levels of ambition. The first is targeted migrations without considerable rework, the second is the use of sustainable software engineering techniques, and the third is application optimization for the cloud fabric.

That could possibly be true since cloud computing is helping to cut carbon dioxide emissions, with the potential to avert more than one billion metric tonnes of CO2 from 2021 to 2024, according to an estimate by International Data Corp. The market research firm outlines that a key factor behind the reduction is the integration of distinct enterprise data centres into larger-scale facilities that can more efficiently manage power capacity, optimise cooling, leverage the most power-efficient servers, and increase server utilisation rates.

Aside from switching to better energy sources, decreasing wasted energy is also important. The physical environment of cloud data centres is optimised to reduce the amount of energy used to cool the environment.

Although there a drawback in this is that, the majority of cloud computing and enterprise data centres are powered by power grids. Multiple sources of power enter the grid, generating energy from a mix of oil, coal, nuclear, and natural gas-fired power plants. Solar and wind energy power sources could be used to supplement their generation capacity. As a result, calculating carbon emissions over time is challenging due to the fact that power sources are continually changing based on a variety of factors, including demand.

By reducing data centre usage and shifting IT activities to a public cloud provider, carbon emissions and electricity consumption are reduced dramatically. Superior hardware arrangement, cloud computing data centres also consume less wattage to supply backup power and cooling for their data centres. To ensure optimal usage and temperature, these data centres are designed at scale and built for efficient energy use.

Due to the extreme significant prices and time spent upgrading servers, traditional Data Center hardware is typically used for long periods of time before being upgraded or replaced. While public cloud hardware has a considerably higher usage rate than traditional servers, it also has a shorter lifecycle and is less expensive to upgrade on a regular basis because new technology improves energy efficiency. The more energy efficient hardware is, the more money the public cloud provider will save, resulting in significantly less energy being used over time.

The reduction in climate change is due to the clouds' increased energy efficiency as a result of lower carbon emissions. “The average corporate data centre has a dirtier power mix than the typical large-scale cloud provider,” according to AWS. AWS, in conjunction with other cloud providers, uses a power mix that is 28 percent less carbon-intensive. This has an impact on climate control expenses, as running machines at optimal performance levels in ideal temperatures is substantially more expensive. Due to the use of energy-efficient technology and lower carbon emissions, the cloud avoids this wasted spending.

More Business Opportunities Beyond Environmental Impact
The first step is finding a carbon-conscious service provider. Different sustainability promises are made by cloud operators, which reflect on how they plan, build, power, and retire their data centres.

The journey toward a sustainable cloud then progresses through three levels of ambition. The first is targeted migrations without considerable rework, the second is the use of sustainable software engineering techniques, and the third is application optimization for the cloud fabric.

Leading companies are raising the bar in terms of innovation, moving beyond data centre carbon reductions. When it comes to hardware, cloud providers have unique size and financial motivations, and they may engage closely with stakeholders to adopt the circular economy.

Moving to the cloud helps the companies to link systems more easily and increase the efficiency of all of its services. According to a poll by software vendor Frevvo, 59 percent of SMBs say the cloud has enhanced their productivity.

The concept of 'green IT' has been around for a while, but the direct impact of hyperscale computing on CO2 emissions is gaining traction among customers, regulators, and investors, and it's beginning to influence purchasing decisions", says Cushing Anderson, programme vice president, IDC.

Looking for Budget-Friendly Smartwatches? Here are the Best Ones Under 10,000

Confused About Which Soundbar to Buy? Here are Some for Grabs Under Rs.10,000