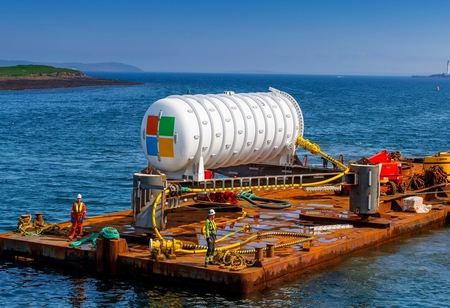 Saving the environment is becoming a top priority among countries around the world, since mother nature’s health already seems to be depleting. Even as you read this article there’s at least one animal who is getting ran over by trucks, starving to death or dying from waste consumption. It could soon be humanity’s turn to join this deathly survival game, if more forests are stripped of their trees, industrial wastes are dumped in rivers, poisonous gases and chemicals are emitted and similar destructive activities continue to take place.

Among all, carbon dioxide emissions and imbalanced greenhouse gases are reasons why summers are unbearably warmer, winters are bone-chillingly cold, monsoons flooding-up lands and basically seasons acting up abnormally due to major climatic changes. Hence, countries across the world are pledging to achieve 'Net Zero Emissions' by 2050. Various companies are hatching plans to save the environment in their own manner. Out of which Microsoft’s idea seems rather unique, as the tech giant has thought about doing so with its data centre.

How it All Fell into Place
On July 9th last year, the tech giant reeled up what it calls its 'Northern Isles', a 12.2-metre-long steel cylinder from the sea, which had remained 117 feet for nearly two years underwater. This research experiment goes by the name 'Project Natick'. The underwater data centre was the most recent test in Project Natick, an ongoing attempt to operate servers without human intervention to see whether the cloud would function underwater.

Natick started in 2013, when Microsoft researcher Sean James, a former US Navy sub-mariner, proposed underwater data centres in a report. In 2014, the company decided to go all-in and formed the Natick team, which was led by Ben Cutler, Project Manager, Microsoft’s Research Organization. It was in 2015, that Cutler's team took the gamble of enclosing a single rack of servers in a container and sinking it off the coast of California in shallow water. Until being retrieved for evaluation, the micro data centre worked successfully for three months.

That was a proof-of-concept demonstration. The real test was with Northern Isles - SSDC-002. In a cylinder filled with unreactive nitrogen gas, it housed 864 servers and 27.6 petabytes of storage. It drew a total of 240 kilowatts, or around 20 kilowatts per rack.

SSDC-002 did not just match up to land-based counterparts, according to Cutler, it outperformed them in some respects. Microsoft claims that the underwater data centre's hardware was eight times more powerful than land-based servers.

Cutler's team took a shipment of nearly 1,000 servers from a data centre that had no longer been functioning. The team divided them into two groups, one on land and one on water, and assigned the same workload to each. 855 of those servers were placed in the Northern Isles canister, where they operated unattended for 25 months and eight days underwater. The remaining 135 servers were housed in a couple of racks in a typical data centre, alongside Azure cloud-based hardware.

“When you have this kind of exponential growth curve, it shows you that most of the data centres we'll ever construct haven't been constructed yet,” Cutler said, emphasizing the importance of innovation in the race to build out what is quickly becoming a vital piece of 21st-century infrastructure.

Environmental Benefits
Apart from the fact that more than half of the world's population lives within 120 miles of the coast, the water's temperature, which can keep the data centres cold, allows for energy-efficient data centres that can use heat exchange plumbing similar to submarines.

Then there's the geographical benefit. As the location of data becomes more important to regulators, it will be easier to locate data centres within geographical boundaries around coasts than on land. It would be easier to retrieve information and use the internet and video streaming if they are placed in the waters off major cities.

With zero human intervention along with steady underwater temperature, the inert nitrogen atmosphere was most definitely a significant factor in the aquatic servers' dependability. Since earth’s atmosphere is mainly of nitrogen, but the 21 percent of oxygen that we breathe is reactive. Oxygen interacts with things, causing corrosion. As a result of switching to nitrogen, it proved to improve reliability.

By nature, the world's oceans are consistently cold at depth, providing instant and free cooling, which is one of the most expensive aspects of land-based data centres. Underwater data centres could also act as anchor tenants for marine renewable energy projects including offshore wind farms or tidal turbine banks, enabling the two industries to progress in lockstep.

Another factor is that by driving seawater through and then right back out, it enables for deployment regardless of the place, without the need to tap into a water supply.

End of the Line
Since it's no brainer that there is immense reliance on cloud-based services, where its public market is expected to hit about $ 623.3 billion by 2023 worldwide, according to the 'Hosting Tribunal' website. This has led to the several establishments of Data Centres, as they are now viewed as indispensable parts of new-age computing. Countless organizations are reliant on their cloud solutions, colocation services, compliance assurances and not to mention, the increasing number of internet users demanding data centre services are the cause of major power consumption by these data centres.

Project Natick is currently an applied research project aimed at evaluating the economic feasibility of operating containerized data centres offshore near major population centres. It provides cloud storage to a world that is becoming increasingly reliant on internet connectivity.

According to Christian Belady, General Manager, Cloud Infrastructure Strategy and Design, Cloud and Business Division, Microsoft “colocation with marine renewable energy is a step toward realizing Microsoft's vision of data centres with their own sustainable power supply".

Belady, who has long promoted research into the union of data centres and energy generation to simplify and accelerate the build out of cloud computing infrastructure said, "our goal is to be able to deploy computers rapidly anywhere on the planet as required by our customers."

The tech giant claims that an underwater data centre will improve data security, which is a key goal of Azure and it strives to make cloud technology more efficient and sustainable to become carbon-negative by 2030. By 2025, the tech giant plans to use 100 percent renewable energy in all of its data centres.