Should You Expect a Mental Health Check from Your iPhone? 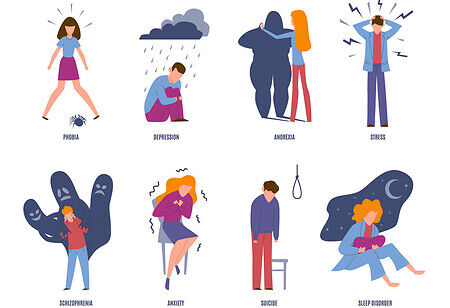 Let’s face it folk, the mental health bars are stressfully high this era ever since the coronavirus smacked the world with a new way of life to live on. As hard as it gets, lockdowns can appear excessive even to introverts when being away from family and the few friends who play as pseudo psychologists. Now is the time that most people could use a bunch of pseudo psychology advice, as isolation for some could increase depression. Particularly those living independently may feel more isolated or lonely than they have ever experienced. For those who have lost their jobs and those trying for jobs during the pandemic either living alone or being the breadwinner of the family, it’s needless to say how far those stress levels could be shooting. Much worse are the ones already battling mental illness, when that depression has been free-loading the body’s upstairs department gets more room as the individual feels more isolated.

Mental health is different for each one, be it mild sleeplessness, lack of appetite or mood swings. They may appear mild, but if they happen to continue for longer periods then sleeplessness can turn into insomnia, eating disorders to Anorexia or Bulimia, and mood swings becoming bipolar among others.

Upon realizing the gravity of human health welfare, tech giants such as Apple Inc., have been devising a line of features and software around the area and are now working on mental wellbeing for the same. The tech giant strongly aspires to move into the healthcare field with its CEO Tim Cook reminiscing about health being the company’s greatest contributions to mankind. Likewise, it has on boarded an internal team of doctors, health coaches and engineers who are crucial in building health-related hardware and software products.

Currently, the tech giant has decided to venture into mental health as well. Rumour has it that it’s already burning the night oil attempting to detect and diagnose conditions such as depression, anxiety and cognitive decline to be made possible through its iPhone.

Apple's Seabreeze and Pi Project
The tech giant plans on using a variety of sensor data such as mobility, physical activity, sleep patterns, typing behavior and more and researchers are said to aid it by seeing how digital signals can detect conditions to create algorithms.

Henrik Berggren, Founder, Steady Health, described how the Apple Watch is most helpful when it comes to tracking exercise and incorporating data from existing blood-sugar tracking devices. Many of the patients at Steady Health already have Apple Watches or iPhones, and the group will use that information in addition to blood glucose levels and eating habits.

For this mission, Apple has joined forces with the University of California, Los Angeles (UCLA) that’s engaged in digging deep into stress, anxiety and depression and this project is code named as ‘Seabreeze’. For cognitive well being, the tech giant has joined forces with pharmaceutical company Biogen Inc., that’s gotten its hands on studying mild cognitive impairment and this project is code named as ‘Pi’.

How they plan to execute both projects will be with researchers comparing data accumulated from iPhone and Watch sensors along with questionnaires questioning participants on how they feel. Even hair follicles are rumored to be used to test the level of the stress hormone cortisol among participants.

Starting with the Seabreeze project, both Apple and UCLA are studying the possible redflags of stress, anxiety and depression through the tech giant’s iPhone and Apple Watch with 150 people hoping to track similar data for 3,000 people this year. UCLA researchers will track the iPhone’s video camera, keyboard and audio sensors, and data from the watch related to movement, vital signs and sleep. These data are said to analyze the user’s facial expressions, the way they speak, heart and respiration rates. Along with that follows the observation of the speed of the user’s typing, frequency of their typos and the content of what they type. In hopes that every bit of data could hold clues to the user’s emotions, concentration, energy levels, state of the mind and the like.

On to the Pi project, the tech giant and the pharmaceutical firm have set out to study cognitive functioning as well as oversee mild cognitive impairment that has chances of developing into Alzheimer’s disease for two years. For this project, a set of 20,000 participants with half of whom are believed to have high risk of cognitive impairment will be assessed for the study. If this study ends up with symptoms matching depression or anxiety, the tech giant has plans of developing a feature that cautions its user upon signs of a probable misfire in the user’s upstairs department.

Prior studies indicate that how individuals with mental illness use their digital devices a bit differently than others, it still remains unclear if reliable algorithms can help detect conditions. Since diagnosis of mental health conditions and disorders are usually done through typical yet effective observations, most people lack access to such facilities on top of being under lockdown restrictions. Therefore, researchers working with Apple have their fingers crossed hoping their efforts convert to a widely available alternative. Given how far they succeed, Apple and its respective researchers may improve the detection of conditions.

Henrik Berggren, Founder, Steady Health, described how the Apple Watch is most helpful when it comes to tracking exercise and incorporating data from existing blood-sugar tracking devices. Many of the patients at Steady Health already have Apple Watches or iPhones, and the group will use that information in addition to blood glucose levels and eating habits.

However, the extent of user tracking brings up another issue and that is concerns around privacy.

Could User Tracking Spark Privacy Concerns?
The tech giant believes that the key to achieving its healthcare goals mainly depends on consumers trusting the company with their sensitive data which raises questions about privacy concerns. Since the tech giant is already in hot waters about how it intended to access user data to warn arthritis of child pornography leading to surge of questions about the tech giant’s commitment to privacy after years of battling the government seeking to access their user’s devices.

Since privacy has always been the tech giant’s utmost priority and it still does and regarding the anti-child pornography issue, the tech giant reasoned out that it planned to shield against intrusion while tackling the exploitation of children.

Although, the extent at which two of its healthcare projects involves user tracking, the tech giant affirmed that it plans to devise algorithms that work on users’ devices and that those data are ensured not to be sent to its servers.