Sixth Sense: A Wearable Gesture Interface for the future 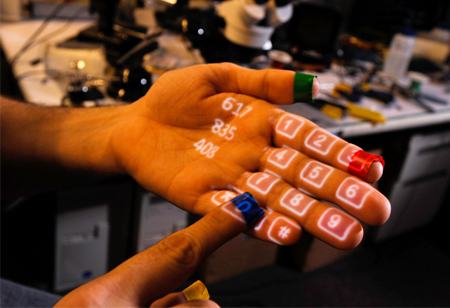 Sixth Sense Technology is the new age for the upcoming digital world. It is all about acquiring knowledge and data more than our existing set of senses. Wearable gestural interface brings the substantial world around us with digital information and can use natural hand signing to communicate with that information. The wearable gesture interface is an insight of augmented reality theory. Sixth sense technology administers us with the liberty of cooperating with a world of digital information with hand gestures. The evolving technology of Sixth sense has a broad range of function in the field of artificial intelligence.

Pranav Mistry is the driving force of the innovation of Sixth sense technology. He initiated his project on sixth sense in the year 2001. Application Sixth sense adopts various technologies like image processing, gesture recognition and different other

technologies. Presently the business product is on the way and not launched yet but the model is prepared. Gestural interface gadget composes a small handy projector. It also contains a mirror and a camera which is limited in a pendant, a wearable device. A mobile computing device is connected with the handy projector and the camera and given to the user. The model projects a visual knowledge enabling areas, walls and any objects around us can be used as an interface. At the same time the camera understands and captures users hand gestures and objects using computer vision based techniques. This technology aims at interpreting human signs with the help of mathematical algorithms. This mainly focuses on the emotions and face and hand recognition of an individual. In the present version of sign recognition provides a unique hand gloves and for the fingers coloured bands are used. Once the hand poster is understood then the signs can be recognised using different methods.

History of sixth sense explains that “Steve Mann is considered as the father of Sixth Sense technology who made a wearable computer in 1990. He implemented the Sixth Sense technology as the neck worn projector with a camera system. He was a media lab student at that time. Then his work was carried forward by Pranav Mistry, an Indian research assistant in MIT Media Lab. He came up with exciting new applications from this technology. Sixth sense technology was developed at media labs in MIT and coined as Wear Ur World (WUW). The inventors have filed patent under the name Wear Ur World (WUW) in February 2010.” say the researchers.

Future vision Sixth sense closesthe communication gap among the digital world and real world. The technology is a multi touch and multi user interaction interface in the coming future. An ordinary individual who wants to lead a simple and comfortable life in the future will opt for a Sixth sense technology as part of their life.