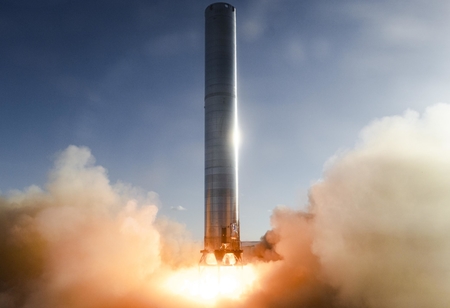 For a while it may have seemed that SpaceX hit the snooze button regarding its rocket launches, but the aerospace manufacturer has in fact created a massive launch tower to support the launch of Super Heavy Booster including Starship's upper base. As planned the aerospace manufacturer launched the massive booster rocket for its new Starship spacecraft on a first try.

This launch involved three raptor engines in what is precisely called as a static fire test took place at Southern Texas and this Super Heavy is particularly known as Booster 3 that targets to blast off a totally reusable launch system for missions to the moon, Mars, and beyond.

The aerospace manufacturer believes that Starship is the ideal key towards getting closer to those goals.

What sounds more super heavy about it is that it’s viewed to be taller than a Falcon 9 or Falcon Heavy rocket in its entirety. As super larger and heavier as it appears than anything produced by the aerospace manufacturer so far, yet SpaceX’s crew have made it possible for it to blast off without any disruptions. This alone is a feat although it’s just a small step towards SpaceX’s astronomical goals.

Musk stated that Super Heavy Booster 3 will most like not be sent into space, but will of course be used for ground tests

First Ever Successful Test Fire
Unlike most Starship prototypes, Super Heavy Booster 3 is the first of its kind to have successfully completed its static fire test right on a first try, considering all the mishaps that happened with the previous prototypes. Be it minor or major mishaps, the aerospace manufacturer has been a witness to the many failed attempts during its static test fire or cryogenic proof.

Although there are chances for every including minor mishaps that would have overthrown the entire launch considering how massive and heavy Super Heavy Booster 3 is, there were no such misfortunes. Since the aerospace manufacturer has ensured that possibility during its first two major tests.

The successful static test fire proves that the SpaceX’s Starship launch vehicle design., functionalities and production are happening at a light-year speed as the company sails towards its first orbital launch attempt.

Upon its success, Elon Musk, CEO and Chief Engineer, SpaceX tweeted, “depending on progress with Booster 4, we might try a 9 engine firing on Booster 3”. This Booster 4 will the vessel to carry Starship. The overall goal is to send the entire apparatus into orbit using more than 30 motors. If that sounds excessive, consider that the Falcon Heavy's first stage booster already contains 27 engines.

Booster 3 Won't Fly to Space
Musk stated that Super Heavy Booster 3 will most like not be sent into space, but will of course be used for ground tests. However, the next prototype, that is, Booster 4, would be the first to launch a Starship.

For that matter, preparations were already in progress way ahead of this current Static Fire Test. This included an ambient proof test on July 8 with nitrogen gas, followed by cryo proofing with LN2 on July 12. The Raptors were installed in stages, with one installed before the cryo proofing and the other two after the test. RC57, 59, and 62 are the three Raptors.

While the Super Heavy booster splashes down in the Gulf of Mexico, a Starship prototype would be launched from SpaceX's Starbase facility in Texas to a target zone near the island of Kauai, Hawaii. As it does with its Falcon 9 boosters, SpaceX wants to eventually recover both the Super Heavy and Starship vehicles for later re-flight.

Booster 3 is Filled with Liquid Nitrogen
Instead of using flammable liquid methane and oxygen as a propellant, Super Heavy uses liquid nitrogen, which provides a similar extremely cold temperature and mass without the risk of a major explosion. Technicians quickly fitted two additional Raptor engines and finished final closeout work on the building-sized rocket a week after that success.

It was unclear how much propellant was loaded, as well as the sequence's timing. But it was expected to have a 45-60 minute countdown, with fueling starting in the 30-40 minute timeframe, similar to Starship. T-12 minutes before the firing, the engine would be chilled.

The T-10 minute siren sounded, as it has in past Static Fires, as per the alarm notification to local households. Mini-holds are to be expected, as they are with Starship, pushing the ignition time to the right and this was proven to be the case in the current launch.

Its fate is unknown until SpaceX completes Booster 3 testing to their satisfaction. It will then be taken from Pad A and wheeled back to the Production Site, possibly joining Ships 15 and 16, with the enticing possibility of the demonstration vehicles being deployed as a backdrop to Musk's much-anticipated update presentation.

By then the limelight will befall on Booster 4, which is poised to launch the orbital test mission at the moment. While that launch is still a few months away, it's vital to know that stacking of the B4 sections in the High Bay has already commenced.

Additionally more sections, such as BN4 AFT 4 and 5, have already been set up outside the manufacturing tent, and the spectacular Thrust Puck for Booster 5 has already arrived at SpaceX Starbase. This speaks volumes of effort being done by the company while it may have seemed to have remained silent over the past few months.

A Mission Beyond Planetary Visits
Starship is definitely meant to fly, but what’s more important is that, it is purposed to make civilization onto other planets a reality. As the technopreneurial business tycoon outlined his ultimate goal saying, “There will be two paths for history to take. One option is that we stay on Earth indefinitely, with an eventual extinction event. The alternative is to progress towards a spacefaring civilization and a multi-planet species, which I believe is the best course of action”.

Musk is commonly known for mentioning this goal multiple times and that goal is working to become a reality someday. Since he believes that settlements require a significant number of people to become self-sustaining.

To make this fantasy a reality, a capable automobile such as Starship is required. The Starship is a rocket and spacecraft proves to be just the right combo capable of transporting more than 100 people to Mars at a time.