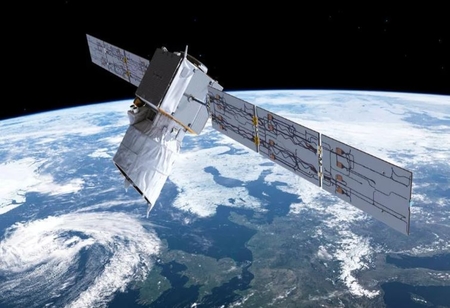 On May 15th, prior to a wonderful sea landing, SpaceX Falcon 9 rocket launched a fleet of 52 new Starlink satellites alongside the two rideshare satellites. As SpaceX works to extend its flourishing broadband constellation, it successfully launched one of its 229-foot-tall (70-meter) workhorse Falcon 9 rockets for the third time in a short span of time.

The day was windy and the few clouds scattered in the blue skies above the launch pad put on quite a display, all seemingly adding up to a grandiose welcoming of the launch. At 6:56 p.m. Eastern, the Falcon 9 rocket lifted off from Kennedy Space Center's Launch Complex 39A. In about an hour and 38 minutes after the lift-off the rocket's primary payload released 52 Starlink satellites from its upper stage. However, this time, rather than the usual 60 Starlink satellites, the rocket carried two more rideshare payloads, where one was the newest of Capella Space's synthetic aperture radar (SAR) imaging satellites and the other was Tyvak-0130 satellite designed by Tyvak Nano-Satellite Systems.

As of May 2021, the company has sent more than 530 satellites into space and all rode on reused rockets. Since, reusability accounted for a more pocket-friendly affair which is important, as SpaceX is both the launch provider as well as the customer of Starlink’s services.

The Purpose of Starlink
Among Elon Musk's ventures, a less familiar venture or one could say that it just rose to fame, after making its debut on the news is Starlink. Starlink is the name of SpaceX's growing network, otherwise referred to as 'constellation' of orbital satellites. It is technically a division within SpaceX. The first prototype satellites were launched into orbit in 2018, after the network's construction began in 2015.

Its sole mission is to provide internet connections to anyone on the planet through a growing network of private satellites floating away in the orbit. After years of development and securing nearly $ 885.5 million in grant funds from the Federal Communications Commission (FCC), Starlink at last launched to fame this year, the project surpassed 1,000 satellites into the orbit and now sits at 1,625 as of May.

Starlink now serves over 10,000 customers and the service is working towards extending preorders to more potential users. Like HughesNet or Viasat, Starlink too aims to sell internet access, especially to those in remote areas and other parts of the world who lack access to high-speed internet. It’s built to cater to that challenge where some parts of the world still face buffering of videos, slow loading of webpages or slow downloading of favourite songs or even failure to load or download the page.

There’s even the option to cater to the absence of owning a router, as its app, supporting android and iOS, uses augmented reality that picks up the best location and position for its receivers. Its speed varies from 50 to 150 megabytes per second and latency from anywhere between 20 to 40 milliseconds in most locations, as per Starlink’s website. The site also promised to establish more ground stations, improvement of networking softwares, data speed, latency and the eventual improvement of uptime to the number of satellites launched and to be launched further.

To that end, Musk had tweeted saying that he expects the service to double its top speeds to 300Mbps by the end of the year.

Furthermore, there’s also the question of fibre or internet delivered through ground laid fibre optic cable offering upload and download speed much faster than the satellite internet. However, tech giants such as Google counter argues that question by implying the time it takes to build the infrastructures necessary to get fibre to people’s homes, by which time a bunch of satellites could be launched into space, especially with Starlink, that could offer internet services before fibers could.

A recent FCC filing indicated that there are high possibilities of Starlink leveling up to becoming a dedicated phone service as well. It would not be much of a surprise if it were to become so, since it's Elon Musk that we are talking about.

There’s also a bulk advantage in the commercial space race, for SpaceX is the only company on the planet to not only be skilled in landable and reusable rockets but those that also deliver payloads after payloads into orbit. Additionally, in 2018, Musk stated that Starlink would assist SpaceX in generating revenue to finance the company's long-held goal of establishing a base on Mars.

Other Key Benefits
In India, Starlink is currently accepting orders for Starlink services. According to Pincode's official website in India, Starlink plans to have coverage in your area by 2022. Orders are processed in the order in which they are obtained. This service is currently available in India for $ 99. We are willing to come to an agreement. You may be eligible for a refund.

Musk tweeted that "many more satellite launches and significant software updates are needed to achieve competitive coverage. Service availability, bandwidth, and latency are all steadily improving. It's unlikely that we'll be in beta this summer"

Recently, Google revealed that it would use Elon Musk's SpaceX's Starlink satellite internet service for its cloud unit. Starlink terminals will be located at Google's cloud data centres around the world, enabling Starlink users to use the cloud and Google to take advantage of the satellite network's quick internet for its enterprise cloud customers.

As part of the partnership, SpaceX will place Starlink ground stations inside Google data centre assets. Thanks to the company's more than 1,500 low-Earth-orbit satellites, Google Cloud will be able to deliver data safely and efficiently.

According to a press release released by Google, customers will be able to use the Starlink-Google Cloud features, which include secure data transfer to remote areas of the world, by the end of 2021.

Fast Forwarding to Starlink's Future
According to a work posting on SpaceX's website, the company is getting ready to start manufacturing the next generation of its Starlink internet satellites.

SpaceX has also begun testing intersatellite links, or 'space lasers', as Musk has dubbed them, which would enable satellites to establish data connections with each other rather than connecting to points on the ground individually. Intersatellite links will boost the Starlink system by lowering the number of ground-based stations needed to operate globally, as well as lowering the network's latency and pace.

All of SpaceX's Starlink satellites launched in 2022 "will have laser links. This year, only our polar sats have lasers,” Musk tweeted.

In a reply to his followers, Musk tweeted that "many more satellite launches and significant software updates are needed to achieve competitive coverage. Service availability, bandwidth, and latency are all steadily improving. It's unlikely that we'll be in beta this summer".