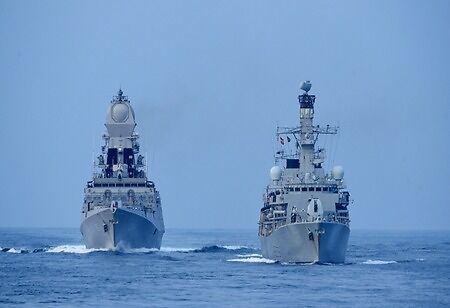 On December the fourth, 1971, the Indian Navy undertook a daring raid in Pakistani waters, sank two Pakistani Navy ships, and destroyed another. We also dropped a merchant ship transporting ammunition in the attack as well. We have come a long from 1971, and it’s excellent the way Indian Navy has kept abreast of this evolution, taking our battleships to a ‘sea of changes’.

Last week, in one of the many recent proud moments for the Indian Navy, India’s Raksha Mantri Rajnath Singh launched two frontline battle cruisers— ‘Surat’ and ‘Udaygiri’ at Mazagon Docks Limited (MDL), Mumbai. ‘Surat’ is the fourth Guided Missile Destroyer of the P15B class, while ‘Udaygiri’ is the second Stealth Frigate of P17A class. The warships are structured by the Directorate of Naval Design (DND) and built at MDL, Mumbai. Singh explains that the warships are the idea of the Government’s unwavering commitment to enhancing the country’s defense capability, focusing on achieving Aatmanirbharta as the whole world is struggling with the global supply chain due to COVID- 19 and the Russia Ukraine conflict. Raksha Mantri praised the work of MDL during the launch of warships as the organization continued its supply during the COVID pandemic.

Surat: The Name and its Features
It's an easy guess where the name of the ship Surat was born. The ship is named after the commercial capital of Gujarat, which is also western India's second-largest commercial hub after Mumbai. The city of Surat has a rich maritime and shipbuilding history. The vessels built in that city in the 16th and 18th centuries were known for their longevity of more than 100 years.

The ship was built under Project 15B, using the 'Block construction methodology,' which involves hull construction at two different geographical locations, joined together at MDL, Mumbai. Surat is the fourth and the last generation of stealth destroyers under the Project 15B program and is a makeover of the P15A (Kolkata Class) Destroyers.

Udaygiri: The Battlecruiser
Udaygiri is named after a mountain range in the state of Andhra Pradesh. It is the third ship under Project 17A frigates and a follow-on of the P17 frigates (Shivalik Class). The battlecruiser is equipped with stealth features, advanced weapons and sensors, and platform management systems. A total of seven ships are under construction in the P 17A program. Out of the total, four are being constructed at Mazgaon Docks Ltd (MDL), while three are at Garden Reach Shipbuilders and Engineers (GRSE).

The warship is the new version of the erstwhile Udaygiri, the Leander Class ASW frigate, which saw several challenging operations in its illustrious service to the nation. From February 18, 1976, it extends over three decades to August 24, 2007. For the first time in indigenous Warship Design and Construction, numerous novel concepts and technologies like Integrated Construction, Mega Block Outsourcing, and Project Data Management/Project Lifecycle Management (PDM/PLM) have been adopted.

If a country wants to safeguard its national interests, it should project its military prowess in areas far beyond the mainland. If a country has aspirations to become a regional or global power, it is necessary to develop a strong naval force

The Indian Navy launched the first two ships under the P17A project in 2019 and 2020 at MDL and GRSE. The Directorate of Naval Design (DND) has prepared the skeleton of both the 15B and P17A project ships. DND is the source for all the warship designs in India. Domestic firms have kept around 75 percent of the orders, a true testament to the Aatmanirbhar Bharat initiative.

The New Era of Warships
Singh states that “The two warships will add might to the Indian Navy’s arsenal and represent to the world India’s strategic strength as well as the power of self-reliance. INS Udaygiri and INS Surat are the shining examples of India’s growing indigenous capability. The warships will be among the most technologically advanced missile carriers in the world that will cater to the present as well as future requirements. In the times to come, we will not only fulfill our own needs but will also meet the shipbuilding requirements of the world. We will soon realize Prime Minister Shri Narendra Modi’s vision of Make in India, Make for the World.”

Raksha Mantri praises the Indian Navy for responsibly discharging its duties of keeping the Indo-Pacific region open, safe and secure. He Adjoins, "India is a responsible maritime stakeholder in the region. We support consensus-based principles and peaceful, open, rule-based, and stable maritime order. Being an important country in this region, our Navy's primary objective is to keep the Indo-Pacific open, safe and secure. The Prime Minister’s vision of Security and Growth for All in the Region (SAGAR) is based on the spirit of friendship, openness, dialogue and co-existence with the neighbors. With that very vision, the Indian Navy is effectively discharging its duties.”

The Indian Navy plays an important role in carrying forward the Government’s policies, such as Act-East, besides strengthening relations with the Association of Southeast Asian Nations (ASEAN) and Bay of Bengal Initiative for Multi-Sectoral Technical and Economic Cooperation (BIMSTEC) countries.

“If a country wants to safeguard its national interests, it should project its military prowess in areas far beyond the mainland. If a country has aspirations to become a regional or global power, it is necessary to develop a strong naval force. Government is making all efforts in this direction. We want to make a strong, secure and prosperous India, which is recognized as a global power,” says Singh.

Avowing that global security, border disputes, and maritime dominance have led nations around the world to modernize their military, the Raksha Mantri urged the public and the private sectors to make full use of the capabilities by taking advantage of the Government’s policies and contribute towards making India an indigenous shipbuilding hub. He also used the occasion to assure all possible support of the Government in this endeavor.

An exact development, the ‘Launching’ is carried out in tandem with the rising and receding tides. The DND and MDL teams have proved their ability to design and build quality battlecruisers. This launch also marks the commencement of the next phase involving extensive outfitting activities by the Shipyards readying these ships for delivery.

Going forward, seven P17A cruisers are under various stages of construction at MDL and Garden Reach Shipbuilders & Engineers (GRSE). Indigenous construction of complex frontline platforms such as Destroyers and Frigates aligns with the Government’s vision of ‘Aatmanirbhar Bharat.’