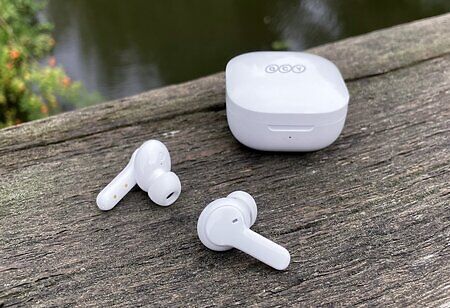 There is no doubt that Indians love shopping, especially when it comes to online shopping. According to the latest reports, India’s True Wireless Stereo (TWS) market posted 66 percent YoY growth in Q1 2022. The Make in India factor has been a significant aspect of this growth, as locally manufactured products have started showing signs of domination over Chinese products. Celebrity endorsements also catalyze growth. The availability of such as wide range of earbuds online can be sometimes overwhelming.

Here are the best five sounding wireless Earbuds under Rs.10000:

OnePlus Buds Pro
OnePlus is undoubtedly one of the most popular smartphone manufacturers globally, and its latest TWS, the OnePlus buds Pro, Makes the parent brand proud. The buds pro was released in 2020 and has been quite popular since then. The gadget comes in stylish designs and has some of the best features. The earphones are made of plastic and are available in two colors: matte black and glossy dark gray. The earphones don’t have any OnePlus branding, giving them a more refined appearance.

The OnePlus buds Pro comes with touch-sensitive stems that control several functions. Besides, the stems do not respond to touch or swipes; instead, users must squeeze them to activate the controls. The earphones are rated IP55 for water and dust resistance, while the casing is rated IPX4. The ANC functions properly and avoids unnecessary sounds. Users can receive up to five hours of continuous listening time with the ANC turned on when it comes to battery life.

Sony WF-XB700
Sony WF-XB700 wear bud is ideal for bass heads because it’s part of Sony’s Extra Bassline. It comes in a pill-shaped casing slightly bigger than most TWS earphone cases. The container is made of plastic, and the matte finish gives a lovable appearance to the earbuds. When it comes to the TWS itself, they have a perplexing design. The earbuds are made up of three layers, an exterior layer, the middle layer that rests in the ear, and an inner layer that will be within the ears.

The WF-XB700 is a beast-like most other Sony devices for audio performance. Sony gives importance to the bass, but the overall sonic balance has remained the same. On the other hand, the bass on the TWS earphones will surprise the users. Taking calls with these earphones should not be an issue because the mic quality is above average.

The Sony WF-XB700 comes with a long-laying battery, where users can operate it for up to nine hours. It takes almost 2.5 hours to charge, while the case takes approximately three hours entirely. Sony has also included a quick charging feature that allows for an hour of playback after only 10 minutes of charging.

Google Pixel Buds A-series
The Google Pixel Buds A-series is a set of the best earbuds under 10000 from Google that are among the most valuable wireless earbuds available in the market currently. Besides, the Buds A-series has several essential features; it still lacks many other features. Even though they appear similar to the Pixel Buds launched last year, the Pixel Buds A-series would receive a 10/10 for its design. The charging case looks comparable, but it is light weighted. The earphones themselves are light and pleasant to wear. They are well-fitting, and users can wear them for a long time. Moreover, each earbud features a wear sensor, which means the audio will be instantly muted if the user takes them out.

The audio quality of the Jabra Elite 7 Active is excellent when we compare it with other brands. The bass is acceptable, and the earbuds work admirably in the highs and mids

The Buds A-series headphones give excellent sound quality. Although the bass on these earbuds isn’t the finest, they work with the lows and highs. However, it is not advised for gaming but is an excellent alternative for routine phone conversations and meetings. On iOS and Android devices, the Buds A-series have the AAC codec as the buds connect individually.

Nothing Ear (1)
The Nothing Ear (1) is another best earbud under 10000, which comes with quality sound. One of the few mid-range earbuds checks all boxes in design, comfort, and sound quality. By distinctive transparent appearance, nothing’s initial product, the Ear (1) TWS earphones, immediately caused a sensation in the market. The most important feature is the design and built quality. The Ear (1) and charging case’s semi-transparent design is unusual. The body is made of plastic, although it might easily be mistaken for glass. The company guarantees that Ear (1)’s plastic will not become yellow shortly. Nothing Ear (1) doesn't have L or R markings on the earphones, like other earbuds on the market; instead, color coding is used. The right earbud is marked in red, while the left earbud is white.

Jabra Elite 7 Active
Jabra is one of the most well-known audio product manufacturers globally. Even though the Jabra Elite 7 Active was launched in November 2019, it is still one of the best earbuds under 10000. The 7 Active is a small light earphone that comes without a microphone stem. Jabra’s redesigned design, the 7 Active, is one of the most comfortable TWS earbuds, even when used for long periods. The earbud consists of a motion sensor, an indicator light, and a dedicated button. The earphones also have an IP55 rating, protecting them from spills and splashes.