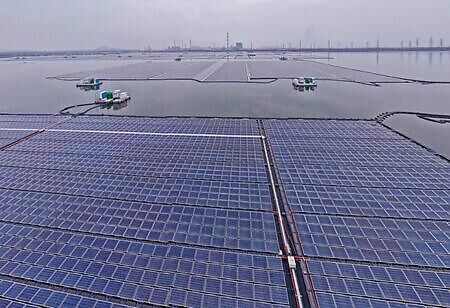 India has the vision to achieve a 50 percent share of energy from non-fossil fuels and the 500-gigawatt (GW) renewable energy capacity before the deadline of 2030. This assumes the significance of Prime Minister Narendra Modi's Oath at the COP26 Climate Conference in Glasgow that India will achieve net-zero carbon emissions by 2070. The Indian government had an initial target of 20GW in 2022, which was achieved four years before scheduling. According to the Ministry of New and Renewable Energy, a further 36.03 GW of solar projects are under various stages of implementation, and 23.87 GW are in the tendering process.

Energy Efficient Solar Power Plants
As we know, installing mini solar power plants in our homes will significantly reduce energy consumption. There are mostly two major technologies used in building such solar power plants. Among them is photovoltaic technology, which will convert solar energy directly into electrical energy by semiconductor cell panels. The solar thermal technology will absorb the heat from the sun. The absorbed heat energy is then converted into mechanical energy and then into electrical energy.

When it comes to environmental concerns, increased efficiency describes the solar panel that will pay back the embodied energy that is the energy used to extract the raw materials and manufacture the solar panel in less time.

What are Floating Solar Power Plants?
Floating panels or floating photovoltaics (FPV) are solar panels structured to float on water bodies, especially water reservoirs and lakes. The floating solar plants are more beneficial and cost-effective too. First of all, it will not occupy land as it will be floating on the water bodies. FPV plants don't have any fixed structures. They are more compact than land-based plants, their management is simpler, and their construction and decommissioning are straightforward. It helps water conservation and water quality.

The most evident benefit from an environmental standpoint is the minimal amount of land needed, largely for accompanying evacuation plans. The presence of floating solar panels lowers the rate of water evaporation from water bodies, aiding in water conservation

The 100 MW Floating Solar PV project in Ramagundam is the largest power plant India has built using cutting-edge technologies and, most importantly, environmentally friendly features. The Southern region’s commercially operated floating solar capacity has increased to 217 MW, including the 100-MW solar PV project at Ramagundam. The project is built for Rs. 423 crores through M/s BHEL as EPC (Engineering, Procurement, and Construction) contract; the project spreads over 500 acres of its reservoir. It is divided into 40 blocks, each having 2.5 MW. Each block consists of one floating platform and an array of 11,200 solar modules. The floating platform consists of one Inverter, Transformer, and HT breaker. The solar modules are placed on floaters manufactured with HDPE (High-Density Polyethylene) material.

The entire system works on the principle of special HMPE (High Modulus Polyethylene) rope to the dead weights placed in the balancing reservoir bed. The power is being evacuated to the existing switch yard through 33KV underground cables. The project seems unique in the sense that all the electrical equipment, including inverter, transformer, HT panel, and SCADA (supervisory control and data acquisition), are also on floating Ferro cement platforms. The anchoring of this system is bottom anchoring through dead-weight concrete blocks.

The environmental aspects of the projects and the government's vision of achieving zero-emission and 100 percent carbon-free India with the green energy floating solar power plant would take us a long way toward reaching the goal. With the help of floating solar panels, the evaporation rate from water bodies can be reduced, resulting in water conservation. We can avoid about 32.5 lakh cubic meters per year of water evaporation. The water body underneath the solar modules helps maintain their ambient temperature, thereby improving their efficiency and generation. Besides, we can avoid coal consumption of 1,65,000 tons annually, alongside reducing Co2 emissions by 2,10,000 tons per year.