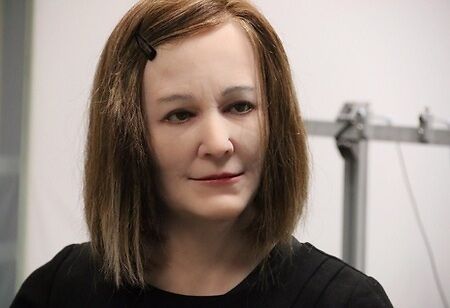 We have been sharing workspaces with robots for some time now. The first industrial robots were used in the mid-twentieth century, majorly to carry out routine manual assembly tasks on production lines. What sets industrial robots apart today is that they can perform their work in a truly autonomous manner without the need for direct control or input to dictate how they work. It is because they are controlled by software algorithms that use artificial intelligence (AI), especially machine learning, to continuously improve their work.

Here are the Robots that are taking new shapes this year:
Nadine
Nadine started working as a receptionist at Nanyang Technological University (NTU), so her circle of friends was limited to students, staff, and visitors to NTU's Media Innovation Lab.

Nadine is one of the world's most realistic female humanoid social robots and is modeled after Professor Nadia Magnenat Thalman, so she looks and acts incredibly realistic. This robot has a realistic human appearance and natural skin and hair. She also has exceptionally realistic hands. Nadine is a friendly, socially intelligent robot that greets you, makes eye contact, and remembers every good conversation you had with her. She can answer questions in multiple languages and show emotions with her gestures and her face, depending on the content of her user interaction. Nadine can recognize people she has met before and have fluent conversations with them.

Nadine also has a personality, and words can hurt her mood. Nadine has a total of 27 degrees of freedom for her facial expressions and upper body movements. She can recognize everyone she meets and remembers the facts and events associated with each person. Nadine is the ideal companion when alone. She can help people with special needs, read stories, show photos, host Skype sessions, send emails, and communicate with her family. It is part of a new technology of human assistance that is desperately needed because society cannot afford to provide a full-time social worker for everyone with special needs. It can act as your personal trainer, available at any time.

Erica
Researchers at Kyoto University in Japan teach humanoid robots to laugh in response to human laughter. The robot, named Erica, can detect when a person is laughing, decide if it's appropriate to laugh back and respond with two types of laughter: a soft laugh and a louder laugh. The scientists then trained an algorithm to identify the basic characteristics of each type of laughter (such as a small, polite laugh) and reflect them appropriately. If they thought all laughter was the same, it would react to anything, but it would not be delightful if it didn't react at all. If a robot can tell the two apart, that's a useful insight.

The research team added different types of laughter to Erica's portfolio, combining her ability to process language with her ability to laugh appropriately so that she could decide what was funny and what wasn't based on the meaning of the words.

RP Vita
What could be better than the ability for multiple medical professionals and caregivers to collaborate in real-time at a patient's bedside? This is exactly what the RP Vita has in store for you. The robot has made it possible to access comprehensive care that is difficult to find in most medical facilities. This robot is already used in quite a few hospitals and will pop up everywhere soon.

A few years ago, ATLAS was recognized as the world's most dynamic humanoid robot. ATLAS was developed by Boston Dynamics in 2013 and is used to conduct search and rescue missions

UR 10
Universal Robots' trusty robot, the UR 10, is rightfully famous. It can optimize production and improve performance in various industries. This robot is by your side, whether in pharma, food, agriculture, automotive, metals, or chemistry. The UR 10 takes on many tasks, such as packing, palletizing, assembly, picking, and placing.

Sophia
Another humanoid robot that shouldn't be overlooked is Sophia, developed by Hong Kong-based company Hanson Robotics. An interesting fact is that it is the first robot to be granted citizenship in any country. In fact, Sophia has officially become a citizen of Saudi Arabia! Sophia is said to resemble the famous Hollywood actress Audrey Hepburn. She performs well as a cloud manager at nursing homes, major events, and parks.

Junko Chihira
This humanoid robot works at Aqua City Odaiba, a shopping mall on the Tokyo waterfront. Junko Sendaira was developed by Toshiba based on the technology of Osaka robot researcher Hiroshi Ishiguro. When it comes to this robot's skills, Junko has great interaction skills and a wide range of facial expressions. She can also greet tourists in Japanese, English, and Chinese, making communication much easier. What sets it apart is the fact that it can interact with sign language to help deaf tourists.

Jia Jia
Jia Jia is another interesting humanoid robot that is definitely in the top 10 list of humanoid robots set to grow tenfold by 2023. Developed by a team from the University of Science and Technology of China, Jia Jia is considered the most beautiful woman in China. She can talk to people and respond accordingly. Her amazing human eye movements and her speech and lip sync were magical.

Gita bot
Don't you hate carrying shopping bags all the time on your trip? Well, no more! This robot is designed to follow you and sort your groceries and luggage. No wonder it's a blessing for short business trips and an excellent travel companion.

Ocena One
Oceana One is widely recognized as a two-handed humanoid underwater robot designed for coral reef exploration. Developed by the Stanford Robotics Lab, Oceana One can reach depths most humans cannot. It's the perfect synergy of robotics, haptic feedback systems, and artificial intelligence.

ATLAS
A few years ago, ATLAS was recognized as the world's most dynamic humanoid robot. ATLAS was developed by Boston Dynamics in 2013 and is used to conduct search and rescue missions. It can navigate difficult terrain and obstacles in its path using ranging, stereo vision, and other sensors.