What is Next for Holograms? 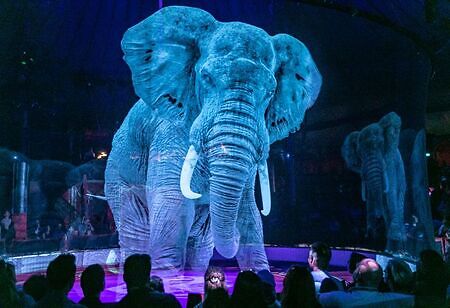 When IWC’s chief executive, Grainger-Herr, found himself being unable to attend a global trade show in China due to COVID-19 restrictions, he decided to show up in Star Trek style or more precisely the holodeck style. With metaverse making the headlines, holograms is a technology that’s been in the movies, books, cartoons, anime and other science fiction depictions for ages.

Firms such as Portl, based in Los Angeles, one of the forerunners in this space has what it calls the world’s first and only single passenger HOLOPORTATION MACHINE that beams individuals to beam from anywhere to anywhere else in the real world. As it suggests, the machine beamed Grainger from his office in Switzerland to Shanghai, who by the way even unveiled a new watch all while in holographic form. Its portals are eight-feet tall glass cylinders built with speakers, microphones and cameras that allows the user inside to see, hear and communicate to those outside. These come at the price of $ 60,000 and can be rented as well.

But far more cost-efficient is the headset device invented by Microsoft, with a hologram communication technology called HoloLens 2 which have a 3D touch but are not precisely lifelike. Rather, the device calls for two or more users to use it and their images are projected as a sort of cartoon-like avatars and are each priced at $ 3,500.

These are solely for business oriented clients, but holograms are deemed to have applicative value across other sectors as well and they are listed below.

Healthcare Sector: MRI and CAT Scans can be viewed in 3D Forms
Modern imaging techniques such as MRI and CAT scans provide data that may easily be converted into digital information. Doctors have traditionally viewed this data in 2D slices on computer screens. Internal organs and bodily components will be able to be viewed in 3D using medical hologram technology. This will allow clinicians to evaluate diseases and injuries in individual individuals more thoroughly, resulting in more accurate diagnosis. This method can also be applied to surgical pre-planning, which is a relatively new subject. The surgeon may see the entire course of the operation before making the first incision. The odds of a successful conclusion are greatly boosted by knowing exactly what precise cuts are to be done.

Banking Sector: Hologram’s Earliest Presence
In recent years, security holograms have been added to banknotes, identity cards, and credit cards. The creation of holograms like this necessitates the use of expensive equipment and makes forgery much more difficult. Full-color and three-dimensional images, dynamic displays, individually personalized text, and serial numbers are among the features of the current generation of security holograms, all of which make unauthorized duplication very impossible.

tensor holography may create holograms from images with depth information provided by normal computer-generated images in as little as a few seconds using a multi-camera configuration or a LiDAR sensor. Since most smartphones have LiDAR sensors, this discovery could aid in the development of real-time 3D holography

Entertainment Sector: Stars Resurrected from the Past
Concerts have been one of the most conspicuous applications of this technology in recent years. Stars from the past can be resurrected to perform once again, and can even perform alongside contemporary performers on stage. These displays can also be applied for live concerts in which the musicians are not physically present but their picture is transmitted to the audience. Holographic display tables that allow real-time multiplayer games are already being tried in the gaming industry. This technology is also being integrated into the next generation of smartphone displays, allowing for portable 3D gaming.

Education Sector: Science and other Subjects in 3D
The use of holograms to improve the educational experience is one of the most interesting applications. Interactive digital lessons will be employed in schools to engage pupils more fully. Mixed reality refers to the integration of digital and real-world data. Holographic representations that students may interact with and inspect can be used to teach complex subjects. During history classes, students can, for example, virtually visit the ruins of old buildings or see individual atomic particles and how they act.

To replace the originals, several museums use holograms of delicate and precious antiques. This is the case with the Lindow Man, a 2300-year-old mummy that is carefully maintained in a chamber of the British Museum of London, and whose hologram is available to the public as well as scholars.

A hologram is a permanent record of the light reflected off an item, similar to a photograph. A hologram, on the other hand, appears to be real, three-dimensional, and moves like a real item. Due to the peculiar manner holograms are created, this occurs. Holograms are virtual three-dimensional representations formed by the interference of light beams reflecting genuine physical things in real life. They can be created in two ways, digitally using augmented reality glasses, or physically with optical displays.

VR vs Holography
One reason is that virtual reality is said to make people nauseous. As VR gives the illusion of 3D viewing while the user is actually staring at a fixed-distance 2D display, nausea and eye strain might occur. A 60-year-old technology reinvented for the digital age could hold the key to greater 3D visualization: holograms.

Holograms provide a remarkable picture of the three-dimensional world. Holograms allow the eye to adjust focal depth to alternately focus on foreground and background, and they provide a dynamic viewpoint based on the viewer's position. But with tensor technology, holograms could be created in VR, 3D printing, medical imaging, and more besides the possibilities of running on a smartphone.

Tensor can make Holograms on appear on Smartphones
A group of MIT researchers has found out how to create holograms that can run on a laptop using artificial intelligence. The researchers used deep learning to construct real-time holograms and employed a convolutional neural network variation (CNNs). The researchers created 4,000 pairs of computer-generated images to train the model. Each pair from the custom database is used to match a picture with its matching hologram, which provides colour and depth information for each pixel.

The tensor network in the CNNs changed the parameters by learning from each image pair and eventually became efficient at making holograms. According to MIT researchers, this completely optimized tensor network outperformed physics-based calculations by orders of magnitude. The memory requirements for the compact tensor network are less than 1 MB. The researchers employed physics-based computations to deal with occlusion. They employed scenes with complex and varied shapes and colors, as well as the depth of pixels, which are dispersed evenly from the background to the forefront, to produce the holograms in the new database. According to the researchers, this strategy resulted in lifelike training data and, as a result, a usable algorithm. The entire procedure is known as tensor holography.

According to the researchers, tensor holography may create holograms from images with depth information provided by normal computer-generated images in as little as a few seconds using a multi-camera configuration or a LiDAR sensor. Since most smartphones have LiDAR sensors, this discovery could aid in the development of real-time 3D holography.