Big Techs' Next Stop is Becoming 'Water Positive' by 2030 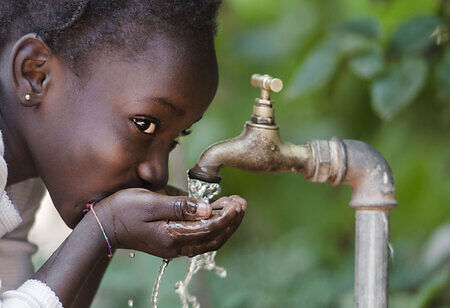 On an average, TheWorldCounts says that the daily use of freshwater per person is 3,800. The world may appear to have lots of water but a large part of those waters belong to oceans, and very few are freshwater like rivers, glaciers, icecaps and the like. Most of the water is used during long showers and in the products that are brought which are referred as ‘virtual water’. Other terms for virtual water include ‘embedded water’ and ‘indirect water’ hidden in products and services that people buy and use every day. Although the use of virtual water goes unseen, that water is responsible for making the creation of a product or service possible and is consumed throughout the value chain.

However, these are not few droplets of water, but are in fact a trade that dried up the Aral sea due to the heavy water demand on the cotton production in the region. To this date, it remains as one of the worst environmental disasters to go down in history. To prevent another similar disaster from happening in the future, big techs are setting goals to become water positive by 2030. Tech giants such as Microsoft, Facebook, and Google among others have decided to replenish water a bit more than they use in their offices and data centers.

Google to Become Water Positive by 2030
Alphabet Inc.’s Google has set its target at replenishing 20 percent more water than its uses in its offices and data centers by 2030, as it’s concerned about water-guzzling tech facilities amid record high droughts. Since the tech giant is believed to have consumed 3.4 billion gallons of water back in 2019, let alone that it’s yet to track replenishing rates.

But its current 20 percent goal, the tech giant feels replenishing water to those parts that barely have proper or clean water to meet the demands of the daily basic needs.

As data centers are known to consume an exorbitant amount of water for cooling and with tech giants like Google that have stacks of computers in its data center that store and process search queries, YouTube and other data. It’s a given how much water is pooled to cool off those processes. Therefore, the tech giant has decided to use minimal water in its offices and instead help conserve water with the communities surrounding its offices, particularly those that are considered to be in the ICU.

The tech giant has decided to start by using rainwater to flush toilets and then take down invasive plants that consume massive gallons of water. Google is even assisting in the installation of toilet leak detection devices in low-income housing in Southern California, to save waste and maintain water cycling through plumbing systems.

While it’s at it, the tech giant has also set about to run its offices and data centers to be carbon-free by 2030. This brings to the next tech giant which has aimed to become water positive with a set of water restoration projects.

“Becoming water positive by 2030 is a long-term goal, but one we're optimistic we can reach based on the huge advancements made over the previous decade, just like our objective to make our whole value chain net zero by 2030. We believe that such promises can make a significant difference in the global race to achieve a more sustainable future”, wrote Facebook.

Facebook Aims to Invest in Water Restoration Projects
By 2030, Facebook wants to be water positive by returning more water to the environment than it consumes for its global operations. For that to happen, the social media giant has decided to launch a set of water restoration projects. It plans to first begin in regions that are much devoid of water.

Part of these steps talk about improving agricultural irrigation infrastructure to limit the amount of water extracted from endangered sources, providing potable water to Navajo Nation residents, and giving fresh water to river systems during dry seasons, among other things. These initiatives, which are located in water-stressed areas, are expected to restore roughly 595 million gallons of water by 2020.

The social media giant has already commenced to fund Rio Grande Water Fund at Bernalillo County, N.M by restoring the connections between the stressed Cedro Creek and its historic flood plain. By reducing drought and promoting biodiversity, this project improves climate resistance in the region, returning about 20 million gallons of water every year. This certainly lives up to that two birds one stone concept.

Additionally, the social media giant seeks for ways to cut water usage across its sites, such as employing onsite recycled water systems and improving the efficiency of its data centers. These methods, combined with the use of outside air to cool Facebook's data centers, have enabled those facilities to use 80 percent less water on average than the industry standard, according to Facebook.

On another page, it looks forward to using technologies to increase water efficiency at its facilities. One of the solutions already in place, which allows its data centers to be cooled with outside air, has allowed for the use of 80 percent less water than the industry standard on average.

Finally, the social media giant is funding programs in watersheds across the world that could have a catalytic effect, such as helping local environmental organizations, governance, research, and other non-volume-generating activities.

“Becoming water positive by 2030 is a long-term goal, but one we're optimistic we can reach based on the huge advancements made over the previous decade, just like our objective to make our whole value chain net zero by 2030. We believe that such promises can make a significant difference in the global race to achieve a more sustainable future”, wrote Facebook.

But way back last year, when the coronavirus hit the world, Microsoft had decided to become water positive.

Microsoft's Pledge with NGOs for Freshwater Access to 1.5 Million People
Microsoft's 2020 sustainability aim is to reduce water usage while also replenishing in water-scarce locations. The tech giant plans to become water positive by 2030, by cutting short on that amount of water it uses and returning more water than they take out.

To make that into a reality, the tech giant has gotten in touch with non-profit organizations to give freshwater access to 1.5 million people in locations where it is most needed. To achieve this goal, it's working hard to employ both natural as well as technological solutions to ensure that they leave more water behind than they take. It plans to exterminate surfaces such as asphalt and others that block water from seeping back into the basin.

Technologically it’s already whisking efforts by building a pipe to transport water to a basin, drilling a well to route water to the earth, or constructing reservoir infrastructure.