Xiaomi's New Robot Can Mimic Humans; What Else Can It Do? 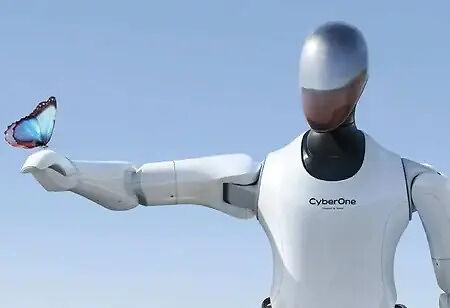 It was around 8 PM. There were ghosts in the kitchen cooking up a squall. But there was no chaotic abuzz. The dish was cooked adequately, the spices were added according to the requirement, and rotis and flaky parathas were cooked at ideal temperatures. They were briskly dropped on a plate in just a few seconds from an e-pan. All the orders were cooked, packed, and delivered within 10-quarter-hour. Confused about ghosts in the kitchen? We are talking about The Ghost Kitchen, a cloud company that has invested in automated products that have transformed its kitchen into a semi-automated workplace.

Robots in the Kitchen
According to reports from Grand View Research, the worldwide cloud kitchen market crossed $11 billion in 2020 and is expected to broaden at a CAGR of 18.6 percent throughout 2021-28. On the other hand, a MarketsAndMarkets report reveals that the global food robotics market was valued at $1.9 billion in 2020 and will develop to $4 billion by 2026 - a CAGR of 13.1 percent.

The marketplace for food robotics has pushed into locations such as the US, Japan, France, and Italy due to the mass manufacturing of packaged meal merchandise. Processes are being automated to maintain the high consistency in most large-scale crops. Even China had adopted mechanization in cooking with automated sauce dispensers and beverage brewers. Indian delicacies, with their traditional cooking procedures and flavors, are a late entrant into the automation membership. COVID- 19 has made the industries adopt them.

At present, the Indian restaurant industry, with more than 70 lakh eateries within the organized class and above 2.3 crore eateries in the unorganized sector, is becoming a giant marketplace for automation corporations. Less than two percent of the gamers have adopted automation of some kind till now. It is a protracted runway forward. Many organizations and manufacturers within the organized phase have plans to undertake some stage of mechanization over a subsequent couple of years, business watchers mentioned.

To add to this, now Xiaomi has launched a new humanoid robot called CyberOne. It measures 177cm in height and 52kg by weight, with an arm span of 168cm. When we compare a humanoid robot with a quadruped robot, it is more mechanically complex. It requires more powerful motors, more degrees of freedom, and complex humanoid biped control algorithms. Xiaomi’s new robot supports up to 21 degrees of freedom in motion and achieves a real-time response speed of 0.5ms for each degree of freedom, which enables it to act like humans.

Structure and Performance of CyberOne
Generally, the performance of the robot is measured by the performance of the joint. This applies to CyberOne as well. The kinetic energy requirements for machines are very high in order to maintain the component’s size. To make the CyberOne’s upper limbs flexible, Xiaomi has developed a high-efficiency motor weighing only 500g with a rated output torque of up to 30Nm for the upper limb joint motor.

The peak torque of the hip joint motor is about 300Nm. The robot is built with the self-developed humanoid bipedal control algorithm; CyberOne’s walking posture has been programmed to be natural and stable. Moreover, the new robot can hold up to 1.5kg in weight with a single hand and is programming by demonstration. However, CyberOne is a humanoid robot with well-developed coordination and exceptional motion capabilities.

Humanoid robots are capable of working in their surroundings. It is structured with a self-developed Mi-Sense depth vision module that is merged with an AI interaction algorithm. CyberOne is capable of perceiving 3D space, as well as recognizing individuals, gestures, and expressions, which allows it not only to see but to process its environment.

The new technologies are also expected to give birth to more application scenarios in other fields, like industrial robots that are featured with improved mechanical performance, companion robots with emotion recognition, and public service robots powered by big data and cloud computing

To communicate with the world, CyberOne is equipped with a self-developed MiAI environment semantics recognition engine and a MiAI vocal emotion identification engine, enabling it to recognize 85 different environmental sounds and 45 classifications of human emotions. The robot is structured and developed to detect happiness and even comfort the user in times of sadness. All the new features are merged in the robot’s processing units, which are paired with a curved OLED module to display real-time interactive information.

Motto Behind the development of CyberOne
Robotics is considered the crown jewel of manufacturing. The major advantage of the humanoid robot compared with industrial robots is that they are valued for their specialized mechanical capabilities. The major challenge in building humanoid robots is to perfectly simulate human processes of perception, cognition, decision-making, and execution under various scenarios. However, numerous new technologies that have emerged in the process of trying to solve this challenge have already been serving the general public in positive ways.

Introducing a new robot is a symbol of Xiaomi’s dedication to incubating a technological environment within a single point, and it will be able to connect with the world in ways never seen before. Xiaomi has constantly been exploring and extending its innovations in various scenarios to better connect people and the world, eventually building an ever-evolving Xiaomi Technology Ecosphere.

The developers have adopted cutting-edge technologies from a variety of sectors, including bionic perception and cognition, biomechatronics, artificial intelligence, big data and cloud computing, and visual navigation. The new technologies are also expected to give birth to more application scenarios in other fields, like industrial robots that are featured with improved mechanical performance, companion robots with emotion recognition, and public service robots powered by big data and cloud computing. Reports say that Xiaomi is on the way to applying CyberOne robot’s technology in its upcoming products.