Zooming into New Functions of Zoom 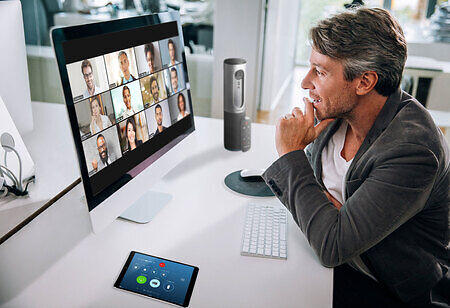 Zoom has brought in new functions that allow users to book an in-office meeting room, exchange cloud recordings, and send video messages. With the most recent Zoom upgrade, meeting hosts and co-hosts with Google and Outlook calendar connections will be able to see who has accepted or denied the meeting invitation and whether they have attended. With that said, below are the new functions for users to have a whole new experience while holding meetings.

Zoom Meetings
Hosts will have more control over meetings now that they may schedule Zoom meetings with Focus Mode enabled from the beginning, reducing participant distractions. Preferred 'Gallery View' can also be saved to each individual meeting ID, allowing the host to load pre-sets rather than having to change the camera placement in every meeting, saving time.

Zoom Chat
Missed video calls will now be shown in a convenient location in your conversation, allowing users to easily verify what they missed. Users can also get to the channel or meeting by clicking on the notification. GIFs will now be displayed in their message box, and movies set using Zoom Chat will now be saved locally on their mobile devices for convenience of access.

Zoom Rooms
Users will be able to book workspaces using an interactive map that can be accessed on-site or remotely through Workspace Reservation. Later this month, the update will be made available for public beta testing. For Mac and Windows users, the platform now supports local-only screen share. Previously, this was only available on Zoom Rooms Appliances, which let the host share their notes and screen with an in-room (locally present) individual while keeping it hidden from other participants. This will be accomplished on the new platforms via an HDMI connection.

Zoom for Home
Zoom for Home, a paid product, now supports the iPad, giving users a versatile, space-saving device for their remote or on-site workspaces. In addition, the company is working with Neat Devices to develop a new portrait-oriented frame/tablet that will take up less space at home while providing excellent sound.

Zoom revealed that it will be rolling out the E2EE feature, which will allow users to host more than 200 people at once while the feature is active

Additionally, Amazon Fire TV owners will be able to download the app and make Zoom calls from their living room, however video calling will require a 1080p webcam.

Users can now send video messages from their mobile devices, which will be delivered to the recipient's voicemail inbox. Other upgrades include privacy options for Outlook and Google Calendar connections, which allow the host to mark meeting and scheduling details as private.

Recently, Zoom included some new functions such as adding more watermark options, improved slide control, attendance tracking, and more. The company has also expanded the ability to enable automatic updates for all users as a result of this. The automatic update feature was previously exclusively available to enterprise users.

Attendance Status is a new feature that has been added to the video calling platform. With Google and Outlook calendar integrations, meeting hosts and co-hosts will be able to see who has accepted or denied the meeting invitation and whether they have attended.

Zoom Meetings are also receiving upgrades, with the new features assisting users in hosting a more 'frictionless' meeting, engaging with guests, and getting the most out of their recorded content.

A host can now select numerous people to control the flow of slides in a presentation with the new upgrade. "With better slide control, presenters no longer need to ask another participant to advance the presentation, streamlining the presentation experience," according to the company.

Options for developing polls for meeting and webinar hosts include ranking responses, matching, short and long answers, and fill in the blank. This functionality would give the host more possibilities to get feedback and insights from team members.

A new watermark option is also included in the update. To assist customers get the most out of their recorded footage while avoiding distracting watermarks, the platform now allows users to modify the size and placement of watermarks. Watermarks are also enabled by default and can be customized via the web portal prior to the meeting.

End-to-End Encryption
Zoom introduced new end-to-end encryption functionality on PC, MAC, iOS, and Android for both free and paying users. According to Zoom, this end-to-end encryption feature will protect users' private and sensitive data, with no one other than the participants of that particular group chat session having access to the encryption key.

Zoom revealed that it will be rolling out the E2EE feature, which will allow users to host more than 200 people at once while the feature is active. However, during the first 30 days, this feature of Encryption will be provided as a technical preview, allowing users to provide input. After the 30-day period has expired, users will be free to use the E2EE service as usual.

Furthermore, hosts can enable this setting at the account, group, or user level, while all participants' devices must have the E2EE capability enabled. Users can do this by enabling E2EE meetings at the account level and selecting the E2EE option on a per-meeting basis. The following are the steps to enable the End-to-End Encryption feature:

•First and foremost, make sure to be Signed in on the Zoom portal.

•Then head towards the navigation panel and click on Settings.

•Under Security, verify that end-to-end Encryption is enabled.

•In case, the feature is disabled, tap on Enable option and click Turn On to verify change.

•Thereafter, choose the default encryption type and click on Save.