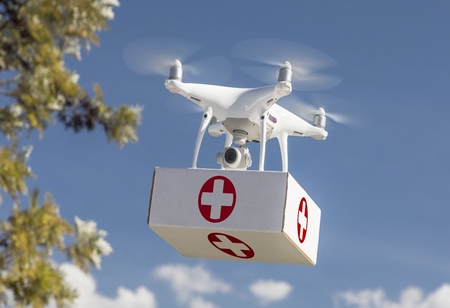 Rural areas in India will soon witness machines hovering over their habitat to deliver COVID vaccines. Since, the HLL Infra Tech Services Limited, under the Indian Council of Medical Research (ICMR), has solicited expressions of interest for the delivery of medical supplies (vaccines/drugs) using Unmanned Aerial Vehicle (UAV) or drones as they are popularly known, at select locations across India.

In collaboration with Indian Institute of Technology, Kanpur, the ICMR, one of the leading institutes at the forefront of India's fight against coronavirus, conducted a successful feasibility test.

According to the EoI, the deadline for submitting online bids through the Central Public Procurement Portal is 1 pm on June 22, and the bids will be opened the same day.

The goal of HLL Infra Tech, is to build a medical supply network that uses drones to transport vaccines and other medical supplies to distant, inaccessible locations in India.

According to HLL, ICMR will hire UAV operators to administer Covid-19 vaccination beyond visual line of sight (BVLOS) in fixed predefined or pre-approved flight paths, according to the company. It has also provided a proforma for interested parties to fill out in order to apply for it.

"Using drones to transport healthcare supplies to people in distant and inaccessible places is a one-of-a-kind project ever undertaken in our country," said Jayesh Ranjan, Principal Secretary (IT and I&C), Government of Telangana

The UAVs required have been specified by HLL. According to the company's specifications, the drone must be able to reach a minimum aerial distance of 35 km at a vertical altitude of 100 meters, take off vertically, carry a minimum cargo of four kilograms, and return to its home base.

As per HLL, the proposed agreement will be valid for 90 days and can be extended based on the performance of the UAV operator and the program's needs.

This comes nearly two months after the ICMR was granted conditional exemption by the ministry of civil aviation (MoCA) and the directorate general of civil aviation (DGCA) to perform a feasibility study of Covid-19 vaccine distribution employing drones. The initiative is a collaboration between the ICMR and IIT-Kanpur.

The exception will be in effect for one year or until new instructions are issued, according to the Centre.

Meanwhile, Flipkart announced that it had worked with the Telangana government to supply Covid-19 vaccinations and other necessary supplies to rural areas of the state using drones. A six-day trial trial will be conducted in Telangana before the 'Medicines from the Sky' concept is launched.

"Using drones to transport healthcare supplies to people in distant and inaccessible places is a one-of-a-kind project ever undertaken in our country," said Jayesh Ranjan, Principal Secretary (IT and I&C), Government of Telangana.

The ICMR will hire UAV pilots to fly drones carrying medical supplies beyond visual line of sight (BVLOS) and deliver them along a predetermined flight path.