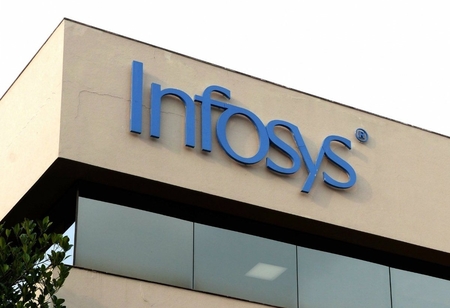 Software exporter Infosys witnessed its market value surpassing Rs.6 trillion mark, including the completion of its shares which hit a record of Rs.1,140, sitting at Rs.600,817 crore of the company’s value. Also, its shares have accomplished beyond the benchmark Sensex both on a year-to-date (YTD) and one-year basis accumulating 12.3 percent and 2.2 times respectively. Comparing the Sensex, it falls on 2.7 percent and 63.5 percent on YTD and one-year basis.

The company is forecast to post a revenue of 26,397.90 crore, while a net profit of 5,168.30 crore is stated by the Bloomberg survey of 15 analysts estimates. A lot of IT companies took notice that the margin growth is more systemic than previously expected.

Currently Infosys eagerly awaits its days to release the results for the fourth quarter and year ended March 31, 2021 fixed on April 14. In the quarter of March Infosys posted cumulative net profit in the quarter, up 16.6 percent from the previous quarter of Rs 5,197 crore.

Investors have their fingers crossed on the stock hoping that the company would fetch big deals as the demand for digital content is believed to increase in the post-pandemic world.

The company’s market value weighs more than that of Hindustan Unilever and Housing Development Finance Corp put together. At present, it is the fourth most valuable company in India which falls behind Reliance Industries, Tata Consultancy Services and HDFC bank.

In the next three years over FY20, analysts expect key blue-chip IT companies' margins to increase 250-350bps. They believe that the latest consensus earnings estimates are already 10–25 percent weaker, even in a basic case scenario.

However, they also indicated that IT companies would display healthy Q4FY21E revenues due to accelerated emerging technology, enhanced demand post COVID-19 market, early deal building which also includes migration into the cloud.

The company’s market value weighs more than that of Hindustan Unilever and Housing Development Finance Corp put together. At present, it is the fourth most valuable company in India which falls behind Reliance Industries, Tata Consultancy Services and HDFC bank.

ICICI Securities expects Infosys to report a quarterly rise of 4.5 percent in sales over a constant term mainly due to cloud transformation, a Vanguard offer, and the reinforcement of trade profits. In addition, income from the dollar is forecast to increase by 5.35 QoQ. At the same time, the margins of up to 132 bps are partly mitigated by off shoring and automation due to the wage rise, higher travel and facilities prices. The company's PAT also rises 22 percent as a result of low basis and travel and facility expense savings.