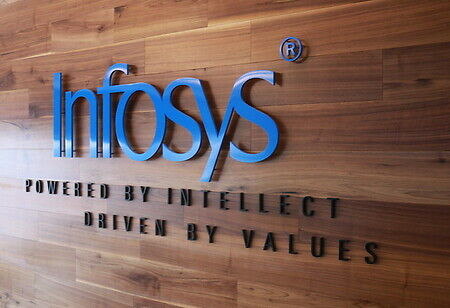 Regarding sequential growth in the December quarter of 2021, Infosys took the lead among its IT peers TCS (Tata Consultancy Services) and Wipro, announcing its revenue growth for the March 31, 2022 quarter as 19.5 to 20 percent accelerated by the sustained expansion in the global technology spending.

TCS and Infosys outperformed on Street estimates on growth as Wipro slowed down after delivering consistent performance in the last three to four quarters.

In what is regarded as the biggest buy back shares, TCS announced that it is buying back shares worth Rs.18,000 crore at Rs.4,500 a piece. Additionally, the IT major declared an interim dividend of Rs.7 per share and Wipro Rs.1 per equity share. TCS’ total cash returned to shareholders is Rs.48,000 crore for the first three buybacks. Although the former managed to report strong revenue growth, it missed the operating profits on Bloomberg estimates with margins coming at 25 percent.

TCS' constant currency revenue increased by four percent sequentially and 15.4 percent year-over-year in CY21, after crossing the $ 25 billion sales threshold. According to the company, this was one of the strongest growth quarters in the last five years.

In terms of dollars, Infosys grew seven percent in the previous quarter and TCS 4.5 percent, with both topping analyst estimates. Whereas Wipro grew three percent that implied minimal growth below street expectations.

Infosys not only achieved its constant currency revenue growth target by seven percent sequentially, but it also raised its FY22 revenue guidance to a range of 19.5 percent to 20 percent, up from the previous aim of 16.5 percent to 17.5 percent. Its margin performance stood out despite growing attrition and greater pay costs. The quarter's margins came in at 23.5 percent.

The company’s CEO, Salil Parekh described companies observing technology spends that, “from a capex perspective, (as) something they want to invest in, it is not just an opex spend”.

The performance of the top three IT services companies, on the other hand, sent a clear message: growth momentum is strong, even in a normally slow quarter. Digital transformation and cloud usage are primarily driving growth.

Moreover, driven by the new normal across the board demand and aided by their cost competitiveness, IT cmanies have e

Analysts are of the view that TCS' intake of nearly 77,000 freshers in the financial year, so far "indicates strong underlying demand and anticipation of large deal inflows going ahead," said Ashis Dash, research analyst, Sharekhan by BNP Paribas.