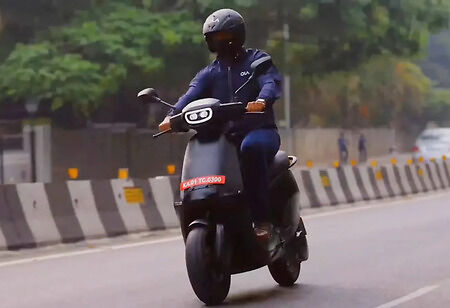 With an aim to produce 10 million scooters per day, the SoftBank Group company moved to the new payment model on May 28. Customers were only able to pay part payments through four separate windows that were open on specific dates.

As per reports, Ola recorded sales growth of 500 scooters per day for three-four days after moving away from the multiple payment window model, with sales falling short afterwards.

Even if Ola sells 1,000 scooters every day, experts predict that 365,000 will be sold this year, falling short of the company's goal.

About 50,000 vehicles have so far been provided by the company.

Currently, the company is doubling down on its future plans, including manufacturing cars and battery cells. It is importing battery cells from South Korean company, LG Chem and is also in hunt for land for both of these projects

India had recorded numerous fire accidents involving electric cars prior to the slowdown in Ola's sales, with one Ola scooter catching fire in March of this year among them.

For the second straight month-over-month sales fall, domestic sales of electric two-wheelers fell by more than 20 percent in May compared to April. Elara Capital's analysis of registration data on the Vahan portal revealed a slight dip in sales in April, the first decline in sales for the Indian EV two-wheeler market in ten months from the Vahan portal.

Ola has in the past come under fire for its quality and for leaving out promised features.

Two million scooters, or around 5,500 units per day, are said to be produced at the company's facilities annually.

Without the central government subsidy, the Ola S1 pro costs Rs 1,39,999. A less expensive S1 Pro model is being developed by the company, which might drastically lower the cost.

The Move OS 2.0 software upgrade for Ola's users is currently being rolled out. Numerous functions that were promised to customers when the business debuted the scooter last year will now be available thanks to the upgrade. This contains options like cruise control, music system, and GPS navigation.

Currently, the company is doubling down on its future plans, including manufacturing cars and battery cells. It is importing battery cells from South Korean company, LG Chem and is also in hunt for land for both of these projects.