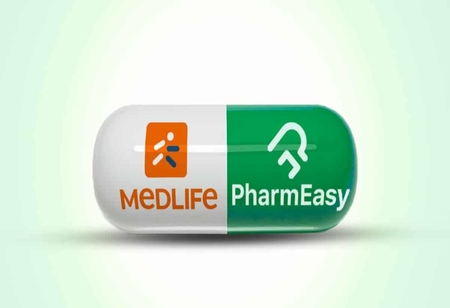 PharmEasy, an e-pharmacy startup, has purchased Medlife, a rival, for an undisclosed amount. PharmEasy's position as India's largest medicine distribution platform has risen dramatically as a result of this agreement.

Pharmeasy will take over Medlife's customers as part of the agreement. Current Medlife users may need to log in to the PharmEasy app with the same mobile number they used on the previous platform in order to set up their new accounts. On the new website, this will bring up all digitized prescriptions and saved addresses for the past year.

Pharmeasy announced in a blog post that Medlife would cease operations on May 25 and be merged with its own website. Medlife's customers and retail partners will be brought onto the Pharmeasy network, according to the firm.

In a LinkedIn post, Dr. Dhaval Shah, Co-Founder of the Mumbai-based startup PharmEasy, said, "in 2015, we set out with the singular goal of making affordable healthcare available to everyone. Every single pin code in the country has now been covered by PharmEasy. We want to reach out to the masses across India and meet their healthcare needs as a result of this”.

He went on to say that as a result of the purchase, the startup would be able to serve over two million families every month, making it the country's largest healthcare delivery network by a long shot.

“While we love the Medlife brand, we believe that a single emphasis on our customer needs through a single platform called ‘Pharmeasy' would help us solve consumer needs much better,” Shah wrote on LinkedIn.

Prabhat Narain Singh's family office, which was the biggest shareholder in Medlife and is one of the founders of drugmaker Alkem Laboratories Ltd, has a seat on the board of API Holdings.

The acquisition follows last month's announcement of a $350-million investment in API Holdings by Prosus Ventures and TPG Development, a US-based private equity company. API's holdings were estimated at $1.5 billion in the transaction, making it India's first unicorn online pharmacy.

Meanwhile, Reliance Retail, Tata Group, and Amazon have all entered the fast-growing industry. Last August, Reliance bought a majority stake in Chennai-based Netmeds for Rs.640 crore, and earlier this month, the Tata Group signed a definitive agreement to buy a 65 percent stake in New Delhi-based 1mg. Amazon, through its largest seller Cloudtail, has started delivering prescription drugs to Bengaluru customers.

Online pharmacies are one of the few sectors of the country's e-commerce market that grew during the pandemic's second wave. Pharmaceutical shipment volumes increased by 18 percent in April compared to the previous month, according to data from e-commerce services platform Unicommerce. Over the same time frame, e-commerce shipments dropped by 11 percent.

According to insiders, order volumes more than doubled over the course of 2020, while the number of people using online pharmacies tripled. Last year, nine million families used online pharmacies, according to market research firm RedSeer Consulting.

“While we love the Medlife brand, we believe that a single emphasis on our customer needs through a single platform called ‘Pharmeasy' would help us solve consumer needs much better,” Shah wrote on LinkedIn.