How AI Could Predict and Avoid Sports Injuries? 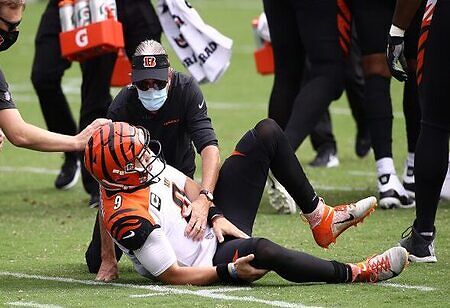 Even 200 years ago, technology and technological advancements in the sporting world have been predominant. It has improved the accuracy, enjoyment and experience of both the athletes and spectators attending sports events. To name a few, the first ever Olympic Virtual Series (OVS) conducted physical sports virtually. Then Google played out six ways for spectators to participate and experience Tokyo Olmpics. Besides, companies such as Microsoft, have already partnered with sports league, LaLiga, to digitize from training athletes to changing the way of watching sports.

There’s more, considering how artificial intelligence (AI) can predict mishaps before happening, coaches and athletes are now observing that the infusion of AI with video serves helpful in predicting injuries before they happen. The infusion is also providing highly tailored prescriptions for workouts and practice drills to reduce risks of injuries. Sports analyst experts predict that in future computer-vision technologies similar to those used in facial-recognition systems, at airport checkpoints among others, will take analysis to a new level. This would probably make wearable sensors, which are widely used by athletes today, look unnecessary.

Let’s hear what Stephen Smith, Founder and CEO, Kitman Labs said. “This data revolution will mean that some overuse injuries may be greatly reduced in the future. There are athletes that are treating their body like a business, and they’ve started to leverage data and information to better manages themselves, we will see way more athletes playing far longer and playing at the highest level far longer as well.”

Into the Future through Computer Vision
To start with, let’s take the guidelines which are provided to the coaches regarding players’ health. The new application of AI in sports can take care of difficult questions about who will own this valuable information. That is the individual athletes or team managers and coaches who benefit from that data. Privacy concerns materialize as well. Living examples like Baseball app Mustard is one that already uses computer vision by recording videos sent by users and comparing them to a database of professional pitchers moves. Then the app suggests needed exercises aimed at making throwing more efficient.

Nevertheless Mustard also comes in a free downloadable version which helps ambitious players improve their performance, and avoid repetitive movements that can cause long-term pain and injury.

Computer vision also makes other sports, like golf, and promises to have relevance for amateurs as well as pros in the future.

Well Algorithms are More Precise
Take a wider look now. Machine Learning-based algorithms are on a whole different level by crunching statistical data from sensors and analyzing changes in body position or movement that could indicate fatigue, weaknesses or a potential injury. Great example of this is the Liverpool Football Club in the U.K., it reduced the number of injuries to its players by a third over last season after adopting an AI-based data-analytics program from the company Zone7. The information is used to tailor prescriptions for training and suggest optimal time to rest.

For that matter, soccer has been among the biggest adopters of AI-driven data analytics. But some individual sports are also trying their hand out in using these technologies. At the 2022 Winter Olympics in Beijing, 10 US figure skaters used a system called 4D Motion, developed by New Jersey-based firm 4D Motion Sports. This helped track fatigue which could have been the result of taking too many jumps during practice.

Devin Pleuler, director of analytics at Toronto FC, one of 28 teams in Major League Soccer, says, “I do think that there might be a future where these things can be trusted and reliable. But I think that there are significant sample-size issues and ethical issues that we need to overcome before we really reach that sort of threshold

Another example is of Dr. Lindsay Slater, a sports sciences manager for the US Skaters who strapped a small device to the hip and then reviewed the movement data with their coach when practice was done.

“We’ve actually gotten the algorithm to the point where we can really define the takeoff and landing of a jump, and we can estimate that the stresses at the hip and the trunk are quite high. Over the course of the day, we found that the athletes have reduced angular velocity, reduced jump height, they’re cheating more jumps, which is where those chronic and overuse injuries tend to happen. Figure Skating is assessing the 4D system in a pilot project before expanding its use to more of its athletes,” Dr. Slater explains.

But Algorithms Still Have Some Blocks to Clear
Algorithms still have to overcome many hindrances in foreseeing injury risk. First, it is difficult to collect long-term data from athletes who jump from team to team every few years.

More to the woe, data collected by sensors may vary slightly depending on the device manufacturer, while visual data has the advantage of collecting remotely without fear that the sensor may fail. However, psychological and emotional factors that affect performance can’t easily be measured such as stress during contract talks, a fight with a spouse, bad food the night before the game. This leads to the next problem, which is ethical violation of a game during an injury.

Ethical Injury is Way More Problematic
The only way to truly test the algorithms is to see if a player, who has been flagged as a risk (as an ethical rules violator) by an AI program, actually gets hurt in a game.

Devin Pleuler, director of analytics at Toronto FC, one of 28 teams in Major League Soccer, says, “I do think that there might be a future where these things can be trusted and reliable. But I think that there are significant sample-size issues and ethical issues that we need to overcome before we really reach that sort of threshold.”

But what’s more concerning is that the US currently has no regulations that prohibit companies from capturing and using player training data, according to Adam Solander, a Washington, D.C., attorney who represents several major sports teams and data-analytics firms. He notes that the White House is developing recommendations on rules governing AI and the use of private data.

Predicting injuries aside, how about predicting the next super star in sports? Let’s jump back to computer vision along with algorithm.

Computer Vision and ML Foretelling the Next Sports Superstar
Currently, one sports-data firm that has adopted this technology is using it not to predict injuries, but to predict the next superstar. This is the Paris-based app Skill Corner which collects broadcast television video from 45 soccer leagues around the world and runs it through an algorithm that tracks individual players’ location and speed.