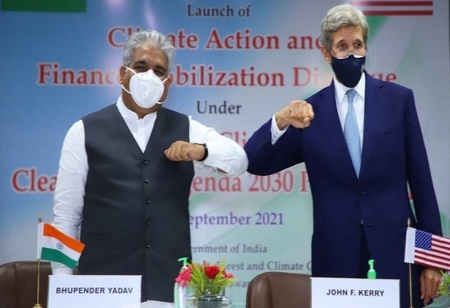 2020 cancelled every plan, but 2021 seems like a year full of plans, starting with India's electric vehicle (EV) industry growth, Net-Zero emission goals, big techs’ plans to combat cyberattacks, water positive goals and now clean energy plans. Seems like countries especially India are finally taking environmental concerns seriously, considering existing threats like water scarcity, harmful gas emissions and other depletion and destruction of natural resources could accelerate earth’s doomsday. Some of these plans are yet to commence, while some have already set sail seeking. Nonetheless this year has beckoned upon numerous initiatives, plans and programs, while the world is still under the evil spells of the coronavirus.

A Legislation to Bolster India-US Efforts on Clean Energy
A high ranking US senator pitched legislation to bolster between India-US efforts on clean energy and climate change, highlighting that he saw positive effects almost immediately. He believes that the forces of two nations joining together would make an even greater impact when it comes to taking down common challenges. Although this legislation was introduced better late than never, since India is already having growing demand for electricity given that there’s a global climate change threat happening. Hence this marks India’s and US’ collaboration comes off as crucial regarding sustainable energy.

“By 2050, we must achieve a net zero worldwide standard. This is not an issue of politics or philosophy, but of arithmetic and science”, emphasizes Mr.Kerry

According to the legislation, India is one of the world's top five clean energy producers, with Prime Minister Modi setting an ambitious domestic goal of adding 450 gigawatts of renewable energy capacity by 2030 in 2019.

Menendez met with India's Minister of New and Renewable Energy, as well as Indian business executives, during a congressional delegation's visit to India in the fall of 2019, to discuss how the two countries can tackle climate change and strengthen cooperation on renewable energy production.

US Will Soon Become an Ally of India's International Solar Alliance
India’s Prime Minister Narendra Modi who’s responsible for conceptualizing the International Solar Alliance (ISA), the nation has now invited the US to join in on the initiative. This is believed to help India's worldwide efforts to mitigate climate change. The announcement comes at the joint opening of the Climate Action and Finance Mobilization Dialogue (CAFMD) by Indian Environment Minister Bhupender Yadav and US President's Special Climate Envoy John Kerry earlier in the day.

The ISA, which was founded in 2015 by India and France, is an alliance of 124 countries, the majority of which are sunshine countries that lie entirely or partially between the Tropics of Cancer and Capricorn.

The CAFMD is one of two tracks of the India-US Climate and Clean Energy Agenda 2030 cooperation, which was established by Modi and US President Joe Biden at the Leaders' Summit on Climate in April 2021.

The launch was preceded by a bilateral meeting in which the two sides discussed a wide range of climate issues, including COP26, climate ambition, climate finance, and global climate initiatives such as ISA and the Agriculture Innovation Mission for Climate Change (AIM4C). Additionally, this not only strengthens India-US’ bilateral collaboration on climate and environment, but will also show how the world can align swift climate action with inclusive and resilient economic development while taking national circumstances and sustainable development priorities into account.

In fact the US senator even appreciated how India has taken a leading role to demonstrate how economic development and clean energy can both be dealt with. But later he stressed that there must be more emphasis placed on Global Climate Action

Mr. Kerry stated that the meeting will be a strong conduit for US-India cooperation, with three pillars: One would be a climate action pillar, which would include shared suggestions examining methods to reduce emissions over the next decade. The second pillar would be to lay forth a plan for reaching the 450GW target in transportation, buildings, and industry.

The fourth pillar, dubbed the ‘Finance Pillar’, would entail working together to raise funds to deploy 450 GW of renewable energy and showcase clean energy technology at scale.

Mr. Kerry's top priority is to rally worldwide support for ‘Net-Zero’, or carbon neutrality, which occurs when more carbon is taken out of the atmosphere or prevented from being emitted than a country emits, and is crucial to avoiding a half-degree increase in global temperature by 2100.

“By 2050, we must achieve a net zero worldwide standard. This is not an issue of politics or philosophy, but of arithmetic and science”, emphasizes Mr.Kerry.

The question of how many governments can commit to a net zero aim and by when is a prominent theme growing ahead of the climate talks in Glasgow, Scotland, this November. Over 120 countries have pledged to achieve carbon neutrality by 2050, with varied degrees of seriousness. Australia and Singapore, who haven't established a firm target yet, are among the five countries with net zero pledges scheduled for after 2050.

India has so far refrained from committing to a net-zero objective, but it is on a climate path that allows world temperatures to stay below two degrees Celsius by the end of the century. According to experts T. Jayaraman and Tejal Kanitkar, the United States and Europe currently occupy more than their fair share of the current available carbon budget, based on their previous emissions.

India is said to have installed 100 gigawatts of renewable energy and has committed to installing 175 gigawatts by 2022, with solar power accounting for nearly 100 gigawatts.