New Ways, the Space Debris, is Getting Techen-Out! 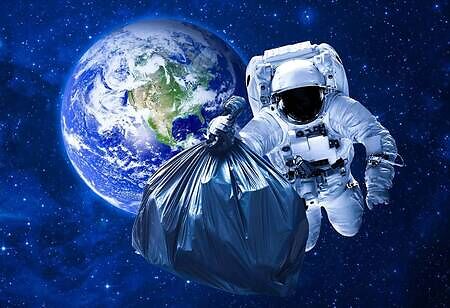 You must have experienced the tension build-up waiting for the big suspense reveal while watching a movie or a TV show, only to dissipate when an advertisement suddenly pops up, or the video starts buffering. But let’s focus on the video-buffering since there’s no avoiding ad. Now, there are many reasons why a signal or connection gets disrupted or lost, and dust can be one of them.

Dust is a silent killer swaying carefree in the atmosphere while causing a ruckus like the common cold, cough, sneeze, and air-borne diseases. Its sickly spell is not only for the living to suffer but is quite commonly found to be a nuisance for electronic gadgets. Take the WiFi-router, which often encounters the problem of dust suffocating the vents, preventing heat from escaping and eventually resulting in heat stress. Dust, grime, and dirt can slow internet speed by worsening their cooling properties.

Not a speck, but a swarm of dust gathering around the components could damage wires or get in the way of plug points in electrical gadgets. The debris in space is no different. The chances of space debris colliding into a satellite from an explosion or the remains of rockets and satellites are not zero. The more debris is collected in space, the higher the threat when executing future space-related activities. Cleaning up the space is equally important to keeping the earth clean. The pollution on earth is worth years full of improper waste management that took time to become a serious problem with humanity paying their penance for it today.

However, with one crash of space debris into a satellite, it’s no internet zone for a mass number of people within a matter of a few seconds. Much worse is when a rocket accidentally runs into or finds itself with cluster debris bolting its way towards it. Just a single piece of space junk can result in a life-threatening space titanic for that particular rocket and other spacecraft. Organizations and companies have proposed numerous ways to get rid of derelict satellites and other space junk.

Budget-Friendly Removal Service
Combining the forces of artificial intelligence (AI), the Internet of Things (IoT), and computer vision, this US-based startup is actively removing space debris in a low-cost manner. Named orbit Guardians, the startup works it out by leveraging AI and the IoT to gather information on debris parameters and eliminate potential threatening targets. It removes space debris measuring about 20 cm to safeguard space workers, tourists, and other operating satellites. Kessler syndrome is a scenario that is caused due to the collisions that happen in the earth’s orbit, eventually generating more debris. It says how important it is for high monitoring, including active removal of the debris. This startup is doing exactly that by combining the capabilities of three different technologies.

“Waste collection in space has been a long-standing, yet not as publicly discussed, challenge aboard the ISS. Four astronauts can generate up to 2,500 kg of trash per year, or about two trash cans per week. As we move into a time with more people living and working in space, this is a critical function just like it is for everyone at home,” added Cooper Read, Bishop Airlock program manager, Nanoracks

Discover, Capture and Destroy
The remains of man-made satellites can usually be found hanging around in the Lower-earth orbit (LEO) and pose a potential threat to the future of space travel. Clearing this debris from LEO is a spin-off from the Swiss EPFL Space Center, ClearSpace. The startup designs technologies to remove unresponsive or derelict satellites from orbit. Through its small satellite solution, it first discovers the debris, capturing it and then removing it from the orbit. The startup has a set target of clearing pieces of debris by 2025.

Warning Approaching Debris
While the space debris in the earth’s orbit is threatening operational satellites, this space startup warns systems to tackle the issue. Why? Space debris monitoring can provide timely alerts and warnings to astronauts and satellites in proximity to the approaching debris. That’s why the French startup, Share My Space runs a collision warning service based on astronomy observations and deep learning algorithms. There is a plethora of solutions offered by the startup for this mission. The first one, INDEMN, predicts risk related to orbital collisions. Second, CALM, enables satellite operators to be prepared when collision warning messages are sent automatically. Third, DRYADE, systematically helps with on-orbit space debris collection based on biomimicry. By lending various data sources, the startup improves the accuracy of debris warning with the help of lasers mounted on telescopes.

Removing Debris with the Power of JAXA
On the same issue with debris orbiting in the earth’s atmosphere, this startup removes them with the aid of a satellite. Known as Astroscale, the Japanese startup removes orbital debris through services such as End of Life (EOL) and Active Debris (ADR). Additionally, it defines the business case for its services while providing technical services. It works alongside national space agencies, international institutions, non-profit organizations, insurance companies, and satellite operators. Moreover, in collaboration with Japan Aerospace Exploration Agency (JAXA) it is currently working on removing a Japanese rocket body. Contributing to the responsible use of space, the startup’s work advances norms, regulations, and incentives.

Sustainable Debris Removal Solution
The need of the hour calls for a new technique to actively remove debris from space for humankind to occupy space. This startup is using a tethered net-removal technology to monitor the debris. The net capture system relies on deploying masses prone to charge fast when the net is cast. The net is moved out of a container and inflates while it makes its way to its target. After capturing the target, the net wraps around it and establishes a tether-line connection to the service spacecraft. Named, Obruta, this US-based startup takes care of growing concerns around safety, removal, and future mitigation of space debris. Through the help of a tethered-net removal technology and end-of-life deployable deorbiting systems, it encounters issues of an immediate threat of space debris. To help humans occupy space in a sustainable manner, Obruta is developing a device named 'Puck' to end the single-use paradigm of spacecraft. Refueling is one of its many features; however, Puck encourages satellites to live a little longer by removing upcoming debris.

Similar to Cygnus Method but More Sustainable
This one talks about the waste management methods practiced by astronauts in space stations. Usually, waste is stored for months, and a Cygnus cargo vehicle, a disposable spacecraft that transports supplies to the space station. After that mission is completed, the astronauts dump their trash into the cargo, where it de-orbits and burns its way into the earth’s atmosphere. NASA has newly developed and successfully piloted a waste disposal technology developed by Nanoracks, a Texas-based space technology company. The test indicates that the technology demonstrates a more efficient and sustainable model of removing waste from the ISS. They hope to turn it into a new utility function for all future space stations.

The new concept uses a specifically designed waste container mounted onto the Bishop Airlock and allows the filling up of 270 kilograms of waste. Similar to the Cygnus method, it completely burns up upon its re-entry into the earth. However, here astronauts don’t have to wait for the cargo spacecraft’s arrival for waste disposal.

“Waste collection in space has been a long-standing, yet not as publicly discussed, challenge aboard the ISS. Four astronauts can generate up to 2,500 kg of trash per year, or about two trash cans per week. As we move into a time with more people living and working in space, this is a critical function just like it is for everyone at home,” added Cooper Read, Bishop Airlock program manager, Nanoracks.