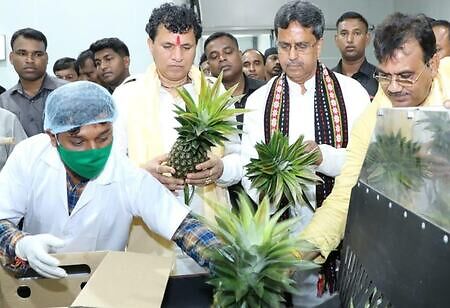 Latest agricultural technologies outperformed other industries during the peak of COVID-19, and due to this, investors' interest in agritech has increased. In fact, there was a favorable milieu even before the pandemic. According to reports, the agritech startups in India claimed about $1 billion between 2017 and 2020, and India was the third largest receiver of agritech funding in the world. Bain & Company predicts the agrotech to expand to a $30-35 billion market by 2025. Startups are deploying transformative technologies like artificial intelligence (AI), machine learning (ML), the internet of things (IoT), etc., to increase efficiency and productivity and bring transparency to the sector. Sustainability, migration, and resilience will be driving the market. However, agriculture traditionally follows a take-and-give policy that utilizes the natural resources from the environment only to produce the same.

Agriculture, especially Horticulture, plays an important role when discussing the roads of COP26 and India’s goal for net zero-emission. Horticulture crops significantly contribute to the country's total agricultural production. It includes a wide range of tools and technologies as it is a scientific methodology for the cultivation of crops.

Let's Take a Look at the Latest Technologies in the Horticulture:

Plant Monitoring Automation
Crop scouting is a major step in pest and disease management. Farmers should take timely decisions and preventive measures. Researchers have developed a digital scouting application for mobile devices that allows monitoring the crops. For example, a scanner may count the insects on sticky cards using accurate image recognition. This way, we can scan the sticky traps in a crop while the dashboard on a desktop or laptop gives a direct schematic overview of the results. The collected data can be submitted to the board for analysis to get suggestions and solutions. The app also has a machine or deep learning capability, which allows it to improve its predictive power over time.

Drones Identify Pest Disease and Management
Drones with sensor and imaging characteristics will play an important role in identifying and reducing crop damage. The innovative solutions of the aerial release of beneficial insects (biological organisms) can now be attached to a drone to disperse this biological solution exactly where it is needed most in the crop. A drone designed with the scouting device now could remotely locate and identify pests and diseases. Drones built with a wingspan of 1.5 m can lift 15 kg, fly over a 20-hectare strawberry field in an hour, and disperse beneficial biological organisms.

Alternative Methods for Traditional Growth of Soil
The new technologies are revolutionizing natural resources such as land and water. Through hydroponics, the plants are grown on sand and gravel. The culture provides the exact amount of nutrients required for the plant to grow and reduces about 90 percent of water consumption, reducing pest problems. The common plants grown in hydroponics are leaf lettuce, tomatoes, peppers, strawberries, and herbs. Aeroponics and vertical farming also follow the new farming technologies that allow efficient use of the space and reduce the distance of food exports. Japan uses a new technology called film farming. In this new technique, the film uses 90 percent less water than conventional farming and offers a viable alternative to resource-intensive agriculture.

In order to double the yield, Tripura Chief Minister Dr. Manik Saha and his government launched an integrated pack house for grading and packaging Horti products.

Dr. Manik Saha says, “Our products are going abroad. Farmers will be benefitted. We are looking at increasing the exports, and unless there is an increase in products, the financial perspective is there to consider.”

Tripura before exported the queen pineapples, lemons, and jackfruits to West Asia, Germany, Europe, and south-east Asian countries like Bangladesh, apart from different states in India. The government is planning to increase exports. The packed house used for packaging the Horti products follows a few latest technologies to wash, treat, dry, sort, grade, pack horticulture products and seal them in cartons before shifting them to a loading area.

Nagicherra Horticulture Research Complex in charge Dr. Rajib Ghosh says, “The processing and packaging of citrus fruits, jackfruits and pineapples were done in traditional methods manually. With the introduction of the mechanized processing and packing chain, things would be faster and more efficient.”

This is the second pack house they are launching. Previously they had launched one at Agartala, which was set up at the cost of Rs. 2.73 crore, against the budget requirement of Rs.5 crore or above, since an existing infrastructure was repurposed and upgraded to cut costs. The installation was set up under RKVY funds of the Government of India. It can handle 10 MT products in a single shift and runs for 12 hours in a shift.

Pineapple undergoes vegetative propagation. Suckers arising in the axil of the leaves on the main stem develop roots and can be used for propagation. Even the crown of leaves above the fruit and parts of the stem itself can be used. In February, Tripura announced to start work-in-mission mode over the next five years to promote the growth of pineapples and jackfruits for facilitating their export to foreign countries after their augmented growth figures were still behind the expected numbers. But the pineapples are not yet grown in sufficient quantities to popularize them in foreign destinations, owing to which the ambitious mission-mode project was decided to boost production figures. To boost productivity, the Indian Council for Agricultural Research (ICAR) center of Tripura designed a high-density weed-resistant, climate-resilient pineapple cultivation technology to intensify pineapple cultivation in the state in July 2021.

Using the latest techniques and technologies, Tripura grows an estimated 1.28 lakh MT pineapples every year in over 8,800-hectare orchards across districts. Some of these orchards are run by the government, but most of them are owned by private parties. Over 4,000 pineapple growers are directly connected to the cultivation of the fruit in the state.

Kailash Chaudhury, Union Minister for Agriculture, Tripura, says, “The pack house is a part of the central government’s continued efforts to boost agriculture and horticulture. The central government is putting extra efforts on North-East India. This region has a lot of potential in agriculture sector. People used to import horticulture products earlier. Now they are exporting elsewhere. There are organic products coming out of here. I’ve been visiting farmers. This pack house will bring integral change in their lives. It will make the farmers Atmanirbhar.”