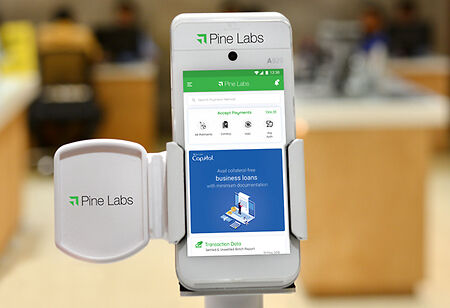 Digital payments and merchant commerce firm Pine Labs banks on Wall Street investment banks Morgan Stanley and Goldman Sachs as its advisors for an IPO (Initial Public Offering) in the US next year.

By this the India-Southeast Asian firm is looking forward to a valuation of $ 6 billion through the IPO and also expects that number to rise a bit.

Earlier this year, when the company raised $ 600 million in two tranches it began to weigh about $ 3.5 billion. On the other hand, it seeks to raise a Pre-IPO funding round as well. Investors such as Fidelity Management, BlackRock, Ishana, Tree Line, IIFL AMC’s late stage tech fund seem to have participated in the round. Its existing investors include Temasek, Sequoia Capital, Paypal and Mastercard.

The company is known for specializing in developing software and deployment solutions for Point of Sale (POS) devices for storefronts. It has been using its offerings on its newly developed software platform with enterprise solutions like Buy Now Pay Later (BNPL) integrations, invoice management, payment gateway and precard issuance.

Pine Labs claims to be processing $1 billion in annualized gross transaction value (GTV) with these stickers, which are available in both physical and digital formats.

Although the company seems to be in the early stages of discussion, it expects to raise about $ 100 million while it's at it.

Even though Morgan Stanley and Goldman Sachs have been elected to support its IPO in the US slated for next year, chances are that this might happen in 2023 if the process takes long.

Pine Labs’ objective of an IPO in the US comes at a time when digital payments are on a steady growth phase in India currently and that coronavirus takes credit for that.

As the company is viewed as the third-most valued fintech in India, it plans on shedding focus on five areas believed to boost its growth for F22 before it goes public. Starting with the scaling of its software commerce stack that’s known to enable users to automate payments and billing at storefronts. The second is to bring offline tech and payment capabilities for small merchants with online channels, which in a way means that the company is building payment gateway services. These services are expected to digitize merchants’ delivery and ledger services. The third comes to forming QR-based solutions. The fourth is about its recent acquisition of Kuala Lumpur-based fintech Fave, which is also helping it grow its position in South Asian countries.

Pine Labs' fifth main area is the issuance of prepaid cards via its fully owned subsidiary Qwickcilver. Through this platform, the business is issuing about eight million prepaid cards for corporate services, gift certificates, and refunds.

Pine Labs' fifth main area is the issuance of prepaid cards via its fully owned subsidiary Qwickcilver. Through this platform, the business is issuing about 8 million prepaid cards for corporate services, gift certificates, and refunds.

Pine Labs claims to be processing $1 billion in annualized gross transaction value (GTV) with these stickers, which are available in both physical and digital formats.

Since other fintechs on the block such as Paytm and Mobiwik have also signed the papers to go public on domestic exchanges by the end of the year. Also, another firm called Prosus took digital payments processor BillDesk under its wing in a $ 4.7 billion all-cash deal.

On top of that, risk investors being both public and domestic have come to India’s sector during the regulatory constraints in investing in China.