5G Already in Hot Waters Before its Launch in India 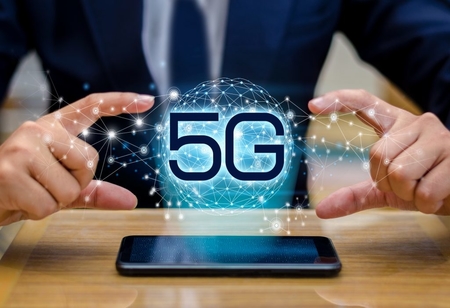 By 2025, 5G networks will most likely cover 21 percent of the world, with most of its users being found in North America at 51 percent, according to a latest report by Statista. Its adoption would immensely impact the telecommunication sector including its customers, since it’s more than just a new-age technology. This wireless technology will bring a connectivity experience that is more agile and fluid.

As a matter of fact, it is designed for the very purpose of connecting people and devices. It makes for an intense impact, much greater than the previous generation of networks, as it will deliver higher multi Gbps-peak data speeds, ultra-low latency, more reliability, massive network capacity, enhanced availability and a more consistent user experience to an enormous number of users. With such capabilities that harbor high performance levels and efficiency, it’s bound to change the definition of the telecommunication sector.

In terms of impact, the wireless technology will make the betterment of other sectors as well, where these sectors are already engaged in preparations to welcome its arrival. The wireless network technology establishes a much safer transportation, improvised online healthcare services, quality farming and digitized logistics to name a few. It is also expected to enhance electronic services and devices like self-driving cars, virtual reality (VR) appliances, telemedicine, remote surveillance and others alike. Furthermore, it can expand into a new spectrum such as mmWave to the amount of network it provides and a lot more that will soon be brought to life.

However, it’s yet to make its grandiose arrival, as it’s only near the beginning of its decade long era and there are already numerous hurdles blocking its way. Some of these are true and some otherwise, but they all stir up uncertainty. In fact, the first one to oppose its deployment was Brussels, Belgium, where the current electromagnetic radiation exposure levels are still below safe levels set by an agency called ICNIRP. Thus, last year, 100 Belgian biology and medicine students demanded a five-year ban on 5G deployments, claiming that humanity's survival is dependent on delicate ecosystems that 5G emissions would jeopardize.

Hence, not only Brussels, but certain countries, states and even prominent personalities have also urged for an examination of the wireless network technology’s impact before launch. With that said, here are the factors questioning its arrival.

many older phones and IoT gadgets to be discarded as people switch to 5G phones around the world if there are no plans to buy them back or recycle them. This will produce massive volumes of e-waste, which is already a major global issue

Unhealthy for Human Health?
While some are eager to welcome this wireless network technology, there are others, who are not particularly opposing it, but are rethinking about its consequences, since the universe is used to the ‘there’s always good and bad to anything and everything’. Here radiation is assumed to be a major concern.

Since its radiation nature consists of millimetre wave signals that have a limited range and cannot penetrate obstacles such as buildings or even leaves on trees and networks using these frequencies will require antennas on every city block, as opposed to 4G technology that can carry signals over kilometres. This indicates that its deployment will necessitate up to five times the infrastructure of 3G and 4G installations. There will be more 5G radio broadcasting signals, but they will also need to be closer to you. Activists and lawmakers are concerned about the sheer number of gadgets sending signals so close to humans.

Environmental Hazards
Plants are often shown to be more vulnerable to EMFs than animals, according to studies. This could be explained by the fact that the plant or tree is always exposed to radiation on the same side. Cornelia Waldmann-Selsam et al. reported morphological and growth problems on trees, as well as premature leaf drop or color change, and branch mortality, as a result of cellular antenna exposure. Also, the need to purchase new 5G mobile phones, will result in an increase in greenhouse gas emissions. Therefore, more mining and use of various non-renewable metals that are difficult to recycle is required to make more IoT gadgets, cell phones, and tiny cells.

There is a possibility of many older phones and IoT gadgets to be discarded as people switch to 5G phones around the world if there are no plans to buy them back or recycle them. This will produce massive volumes of e-waste, which is already a major global issue.

Impacts on Wildlife
Insects, small birds, mammals, and amphibians, may be particularly vulnerable to 5G mmW. Arno Thielens et al. confirm that mmW has a greater temperature effect on particular insects, which could affect their behavior, physiology, or morphology. Water, cell plasma membranes, and cell genomes could all be targets for waves. mmW's sensitivity to many physiologically active substances, including antibiotics, changes. Antibiotics used in combination produced stronger effects, which could lead to antibiotic resistance in bacteria. This could make treating infectious disorders caused by bacteria more challenging.

EMFs can also interfere with the ability of some insects and birds to navigate using the earth's magnetic field, according to scientific studies (magnetoreception). Even in the dark, bees, wasps, and ants should expect detrimental EMF impacts on their magnetoreception function.

The COVID-19 Slowdown
Despite the ongoing pandemic being the biggest barrier to almost every new innovation’s emergence, however, for 5G, even though its emergence is delayed, the preparations to accept its emergence are in progress.

The Juhi Chawla Lawsuit
Juhi Chawla, a Bollywood actress and environmentalist, has petitioned the Delhi High Court to stop the 5G rollout, citing the dangers it poses to animals, flora, and fauna. According to the petition, “The state also has the responsibility — based on the idea that ‘prevention’ is preferable to ‘cure’, to scientifically vet all things and technologies before they are allowed to be commercialized and/or accessed by the general public." Ms. Chawla believes that these 5G plans will have far-reaching, long-term effects for humankind, as well as irreversible harm to all of the Earth's ecosystems.

Last Thoughts
A lot of these speculations seem to revolve around the high frequencies, which has been the same for previous network generations as well. High frequencies have caused health hazards to humans, but mostly wildlife where species are driven to extinction. This is increasingly true in the case of sparrows, as there are only few of them left. Hence, 5G’s deployment is certain, except that the world has to wait until every part of it is thoroughly tested and verified.