These Five Tech Startups are Taking India Closer to Space 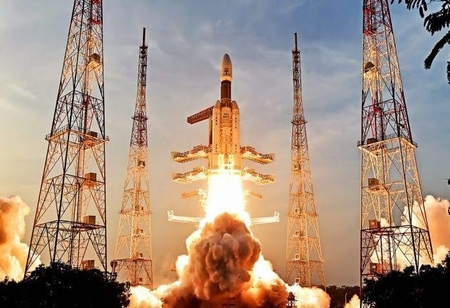 India's space tech sector is booming, especially after Agnikul and Skyroot each bagging a total of $ 11 million this year. Despite COVID-19's outbreak in 2020, with cash crunch being a main issue for most sectors, its space tech sector did not back down on the money for its programs. Except for postponing launch missions, the sector otherwise pressed forward with its operations, as to make the dream of becoming the top space-tech sectors worldwide into a reality.

But at the moment, India contributes nearly three percent to the global space sector which is estimated to be about $ 350 million, according to K Sivan, Chief, ISRO. Therefore, to shake things up the Finance Minister Nirmala Sitharaman announced major reforms as a part of the Atma Nirbhar package, to involve private players into the country’s space sector. This not only allows these players to take part in the missions, but helps in upgrading their organizations as well.

Together with the private players, the sector, like never before, serves more benefits for the country. As a result, they help cater to the communication infrastructure, sustainable development, disaster predictions, healthcare and agriculture monitoring and pretty much signaling mishaps or projecting the current happenings.

“The government's platform for encouraging space enterprises in India has given investors, customers, vendors, and others confidence”, remarked Srinath Ravichandran, Co-founder and CEO, Agnikul

Although these start-ups are thriving, it’s no hot knife through a butter business, but rather a survival of the fittest as Charles Darwin remarks. Since the more of these players come into the court, the more competition is built and putting up with all that and emerging as a space tech start-up is a remarkable feat of its kind. Sadly, a lot of these start-ups lose the match and are forced to pack their bags. However, ever since Elon Musk's SpaceX debut, many space sectors across countries are inspired to also make it big in their own respective manner and the same is true for India as well. Hence, here are the five innovative space tech start-ups in India that are gradually contributing to a better future for the space endeavors of the country.

Pixxel - The Health-Monitor
With a mission to build health-monitors around the planet, is deemed to be Asia’s only space tech start-up worthy of the 2019 Techstars Starburst Space Accelerator in Los Angeles. Co-founded by Awais Ahmed and Kshitij Khandelwal in February 2019, it’s partnered with NewSpace India Limited (NSIL), a public sector enterprise and commercial arm of ISRO, has been aiding the start-up to launch remote-sensing satellite on an ISRO PSLV rocket. Moreover, it has acquired $ 7.3 million (Rs.52.8 crore) from Techstars, Omnivore VC among others and has already set sights on launching the world's highest resolution hyperspectral satellite constellation.

Skyroot Aerospace - Manufacturer of Lighter Rocket Engines
Based off of Hyderabad, the start-up is a private aerospace manufacturer and commercial launch service provider and is India’s very first privately owned start-up that builds rocket engines and SSLVs. The firm builds rocket engines that are lighter, considering the weight factor widely contributing to mishaps during missions. The co-founders Dr.Pavan Kumar Chandana and Dr.Naga Bharath Daka, have already etched plans to start a family of rockets and to design rockets that are capable of placing orbits of about 200 kgs to earth’s lowest orbits. As to enhance communication and data gathering at all times with or without human activities. Currently the company is prepping for its first launch vehicle Vikram-I. Overall, It has raised $4.3 million in a funding round that involved Solar Industries and further hopes to raise another $15 million by 2021.

Bellatrix Aerospace - New-Gen Space Propulsion Systems
A Bangalore-based start-up co-founded by Rohan M Ganapathy and Yashas Karanam in 2015, is known for building advanced space propulsion systems and rocket propulsion technologies. With its laboratory seated at the Indian Institute of Science, the start-up aims to work on missions together with Dhruva Space. At present it’s working on an 'Orbital Transfer Vehicle (OTV)’, which will be launched in 2024. However, prior to that mission, it plans to launch the ‘Chetak' rocket by 2023. The start-up has procured $ 3 million during a series-A funding round by IDFC-Parampara, Start-up Xseed, Karsemven Fund (KITVEN) and Survam Partners (Suman Kant Munjal family office) and is valued at $ 10 million at a post-money valuation.

Agnikul Cosmos - 3D Printed Semi Cryogenic Rocket Engine
Co-founded by Srinath Ravichandran and Moin SPM, the start-up is based at IIT-Madras’ National Centre for Combustion R&D (Research & Development). After the launch of IN-SPACe in 2016, this Chennai-based space-tech start-up had signed into a Non-Disclosure Agreement with the ISRO. This grants access to the start-up to use the latter’s available technological resources and facilities that immensely helps in the development and launch of Agnikul's small satellite rocket. Moreover, it has already set plans for the upcoming year, as it plans to launch Agnibaan, a small-lift rocket capable of depositing a 100kg payload in a 700km orbit. This year alongside Skyroot, the start-up has raised around $ 11 million and has made headlines for inventing the Agnilet, a 3D-printed semi cryogenic rocket engine.

“The government's platform for encouraging space enterprises in India has given investors, customers, vendors, and others confidence”, remarked Srinath Ravichandran, Co-founder and CEO, Agnikul.

Capella Space - The Space Press
An information service provider that delivers high synthetic aperture radar earth observation imagery with a minus 0.5 resolution. Along the line it ensures easy access for frequent, timely and adaptable information affecting dozens of businesses all around the world through a string of minute satellites. It’s also garnered with high resolution SAR satellites that are paired with unbeatable infrastructure that relies on global insights to enhance knowledge about the dynamic world, in exchange for enabling better business, interaction and well-being. The company aspires to make timely Earth observation a necessary tool for trade, conservation, and human well-being. Capella Space is a San Francisco-based start-up that was formed in 2014.

The Indian space economy, according to a PwC report, is worth $7 billion and accounts for two percent of the global space industry. It goes on to say that the Indian space sector will need to develop at a 48 percent compound annual growth rate (CAGR) over the next five years to meet its $50 billion ambition. To top things off, the forces of both private and public sectors are not only attracting investors which helps to innovate more, but are becoming responsibly involved in preparing the country for a blast-off to become one of the world’s top space-tech sectors.